Liam Toland: Connacht will prosper if they focus on protecting the ball 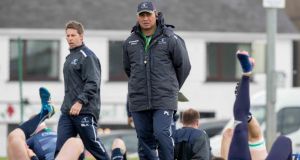 Are Toulouse a heavyweight of French rugby? Certainly they have a squad packed with international stars and boy does their European squad impress. But it’s a funny French Top 14. This week I watched the recent Toulouse-Stade Francais game. Before the game Toulouse were 12th in the table with two wins from five and a -23 points differential; almost identical to Connacht after their five games. Now Toulouse have four wins from eight with +6 points deferential and they are lying sixth in the Top 14 table. Had Connacht not such key injuries tomorrow I would be confident.

Away in Toulouse, Stade Francais were down massive players, had Sergio Parisse sent off after 37 minutes and missed buckets of kicks to lose by five points; so even still Connacht have a chance.

The two talking points for tomorrow are around the fringe (scrum/breakdown) and the Toulouse second receiver.

As expected, Thierry Dusautoir leads from the trenches at the breakdown. Connacht have at times struggled to maintain possession on the deck and both Toulouse flankers are relentless in their post-tackle actions. They continue to hunt six inches from the deck, and will attack even the safest of Connacht ball placements.

Connacht need to be aware of his presence and the next Connacht man must ‘attack’ Dusautoir long before he gets poaching. If not, then the many amazing counterattack breaks led by Tiernan O’Halloran from deep will end in heartache breakdown penalties being pumped 50 metres downfield from where the attack came.

So the key to success for Connacht is firstly how they manage their ball in contact and subsequently on the deck to limit Toulouse steals; and secondly, and probably more importantly, how they manage their defensive systems. For Toulouse, their second receiver (definitely not Toby Flood) is crucial.

Whoever stands at 12 for Toulouse will give insight into their potential out wide and how Connacht defend.

They have a real gem in Gaël Fickou and quality wider out. Should Fickou find any space, then Connacht will be in trouble.

So back to Connacht’s defence. There are many variants but Bundee Aki’s role will be so interesting. Connacht need to blitz off the line to pressurise that Toulouse second receiver.

With rain forecast, bizarrely suiting much of Toulouse’s tactics, the damp ball will be easier to defend from a blitz, putting huge pressure on that second receiver’s distribution. For all Toulouse’s pedigree, their backline attack, especially off phase, is often appalling.

So a blitz by Connacht will pressurise that first phase with a switch to drift that’ll force the ball and the Toulouse player into touch.

Toulouse will kick off right from Jean-Marc Doussain’s left foot. But any loose box-kick exits from Connacht will be run back devastatingly. For all of Toulouse’s relative struggles, they are still one of the best sides in realigning off a turnover. Watch their entire midfield (backs and forwards) as the ball arrives into the Toulouse tram tracks, and keep an eye for the realignment and outrageous depth of all the loose players to attack. Watch as players, like winger Alexis Palisson, pop up all over the place.

I contrasted CJ Stander and Jamie Heaslip from last week and I note that Toulouse tend to dominate contact, aiming at a weak shoulder before offloading. This is especially powerful when the first carrier in midfield is 120kg monster ‘openside’ Piula Faasalele running hard at the soft centre, followed by the lighter and more agile midfielder like Fickou or Florian Fritz taking from him before mimicking the exact same action.

That their outhalf Doussain expects positive yards allied to a quick offload after contact has him attacking the line where he has options. He is happy to test tackles himself or often to elect for a floated chip or to turn defences backwards from a thread-through sliding kick. But he oscillates between scrumhalf and outhalf in order to keep pace on their attack.

Doussain taking flat off quick ball is not limited to the backs – the forwards are equally adept at this action, making Connacht’s defence on both sides of the breakdown especially challenging.

Slowing down the Toulouse breakdown, therefore, becomes a key part of their defence, and this is where Denis Buckley will be sorely missed.

Toulouse, as expected, have a powerful scrum, which weathered Stade Francais with ease. What their number eight Gillian Galan does at scrum time or around the pitch is a mystery but the rest are working very, very hard.

Ironically, although less athletic, Maestri is right at the heart of Toulouse’s defensive lineout. They often pod at the front with Galan leaving a roaming four to cover the remaining eight metres. This they do with seven, four, five, and six at the tail. Decisions are made on the hoof to get the right man into the air. This will place huge pressure on the Connacht throw.

So Connacht need to stay out of the trenches, avoiding scrummaging and the fringe, whilst pressurising Toulouse second receiver to nullify their back three. Then, they can win.