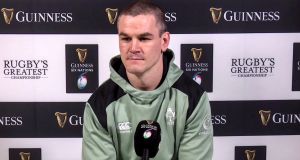 Like Tom Brady, he’s a legend and as Brady approaches his 10th Super Bowl with his new franchise, the Tampa Bay Buccaneers, on Sunday week, earlier that same day Johnny Sexton will hopefully embark upon his 12th Six Nations campaign.

Given Brady is 43 and Sexton, who admires the quarter-back hugely, a mere 35, that ought to be a source of inspiration.

“Yeah, it’s pretty incredible at 43. I definitely don’t want to go to that age though,” he said, chuckling. “That’s too much.”

“Look a lot of it has been me just being a little bit stubborn or half joking,” he said in reference to previously citing Brady’s example. “But you’ve got to take it campaign by campaign, or year by year, when you get to this age.

“At the moment, I feel good despite picking up a niggle, as sometimes is the case before you go into Irish camp, but take it campaign by campaign and see how you feel at the end of the season. But it is inspiring to see someone like that have success for so long.”

The motivation is undimmed but as his latest hamstring issue (if “nothing major”) demonstrates, staying injury free is his challenge. Currently on 95 Tests for Ireland, he could reach 100 on the final weekend against England.

Like any player in the nervous 90s, he does think about it “the odd time”, adding: “It would be a pretty special milestone to get to. For me, when you get your debut at 23, you never imagine 100 caps will be possible. It still might not be, you still need to stay fit, play well and get picked to get there.

“It would be a special group to get into. You look at the players in there and they’re all special players in their own right. Of course I’d love to get there. Whether it happens or not is another thing. It’s another little bit of motivation but that’s very much down the line.”

Sporting his new lockdown hair cut, presumably a DIY job, Sexton bade adieu to his wife Laura and three kids, Luca, Amy and Sophie, yesterday before the squad’s first stint of 18 nights in a bio-secure bubble.

“It was a different goodbye,” he admitted, if “not as bad” a Lions tour or World Cup. “But it’s not like a normal Six Nations where you say, ‘I’ll see you on Tuesday afternoon after training’.

“I saw Joe Marler pulled out of the England squad for family reasons and I do understand that. But also the opportunity to play for your country and to give your country a lift, and to be part of people’s happiest memories of the week would be to watch Ireland play, for me it’s a huge pull. As much as I miss the family I wanted to be here and to play for Ireland.”

5 Chelsea win at Liverpool to move into top four