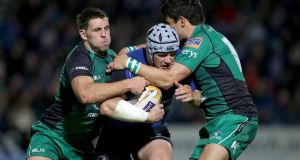 Leinster’s Shane Jennings will lead the charge into the Dragons’ den at Rodney Parade.

Matt O’Connor will know more about his squad, individually and collectively, by the time the final whistle blows tonight. For the Leinster coach this RaboDirect Pro12 match is not about the players who are missing because of injury or national squad commitments but the aptitude and attitude of those looking to engineer a fourth successive victory in all competitions for the Irish province.

Players covet opportunities, especially those who must exist on more meagre rations, in terms of game time, than they’d like. This is a vehicle to challenge the ‘natural order’ in terms of selection. It’s a tough remit. The Newport Gwent Dragons might have lost heavily at the Ospreys (40-17) last weekend but they’re a different prospect at Rodney Parade.

Talk up Leinster
They have won all three of their home games to date, beating Ulster (15-8), Scarlets (23-16) and Zebre (30-7). Eight changes from last weekend – only two players lost to the Welsh squad – in Andrew Coombs and Toby Faletau, suggests this is a match they might consider winnable, although captain for the night, flanker Lewis Evans, was happy to talk up Leinster.

He admitted: “They always bring a formidable team. Their strength and depth in the squad is unbelievable and we have lost our two internationals. We have had to bring in some of the guys who probably haven’t had much game time this year or they have started every game, whereas they pretty much have a new starting line-up with fresh feet.” Goodness knows how he would have felt if Leinster had arrived laden with front-line players.

Zane Kirchner, who made his debut last week against Connacht with a nine-minute cameo, starts at fullback. He then returns to international duty with the Springboks as part of their squad for three Test matches this month.

Midfield partnership
Former Wallaby Lote Tuqiri has recovered from the hamstring injury he sustained in the Munster match, while Luke Fitzgerald is given an opportunity at outside centre, forming a midfield partnership with Noel Reid. Darragh Fanning adds physical presence on the right wing, while Jimmy Gopperth returns as outhalf and primary game manager, a role he’s discharged superbly this season.

The New Zealander understands the onus to lead in word and deed. He admitted: “We want to close off this part of the season before the November break on a high and we have a bit of ground to make up in the Pro12 table.

“It has been good to get a run of three wins on the bounce, but each of the players know that this week we have to step up. There will be a few new faces and it’s important that we have a few of the experienced heads back because players like Jenno are proven leaders. We will need to tap into all of our experience in Newport because they’re going to be pumped up themselves having lost to the Ospreys last weekend.

“From our end we know that there’s room for improvement after last weekend. We showed a bit of bottle to hang in there and get the win after being behind for spells against Connacht, but we know that we have to be more clinical at our set-piece and in attack. Our defensive effort was good and it will need to be better again this week because the Dragons are a team who like to play with a lot of pace out wide.”

A framk appraisal
Leinster’s captain tonight, Shane Jennings, offered a frank appraisal of the shortcomings in the province’s performance last week. No one will work harder to rectify those issues and he’ll expect plenty of support in the pack. It’s Leinster’s front five – Michael Bent switches across to loosehead – that are going to have a big say in the outcome, from the set-pieces to providing a platform for the team in terms of quality, front-foot possession.

There’s a surfeit of athleticism, nous and speed in a backrow of Jennings, Dominic Ryan and Rhys Ruddock so if the conditions permit – some rain is forecast – the visitors should prioritise an expansive, offloading approach. They’re not equipped for an arm wrestle, while the bench is pretty callow in terms of experience.

The bookies make Leinster one-point favourites but the Dragons are playing at home, where they have yet to be beaten this season. It’ll be close but Gopperth’s boot might hold sway.