Members need to be in system where their salary meets their needs, says Hassanein 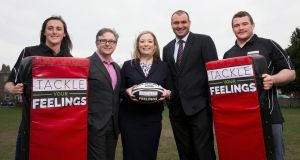 “We felt our academy members need to be in a system where their salary meets their needs,” Hassanein told The Irish Times at the launch of the Irupa-backed “Tackle Your Feelings” initiative.

Academy players are also no longer expected to cover the €2,000 annual insurance premium. “We want them to be the future of the game. I think we all felt, including the IRFU, that those guys needed to be fairly compensated for the years they are in the academy system.”

Hassanein also highlighted moves towards removing a three-year academy deal for two reasons: to ensure a player doesn’t become too comfortable or miss out on financial gain due to rapid development.

“Now in most cases there will be renewals but it will put pressure on players, year to year, to perform, which is a good thing at that level.

“Equally, if the player is good enough he is able to put pressure on his employer to go to a higher level of contract.”

This does happen. Garry Ringrose is still listed in the Leinster academy but after becoming a regular starter this season for the first XV, and following some outstanding performances, contract re-negotiations followed.

“But you have to be recognised. If you are up in the senior squad for two or three months straight and asked to train like a senior, asked to train through the day so you have to give up part time work or studies, then our view is that there should be fair compensation.”

This entire process was hastened after it was discovered that some academy players were delivering food, and other part time jobs, after training as they were unable to live off a €4,000-a-year deal.

Hassanein was speaking at the launch of the Tackle Your Feelings campaign, in partnership with Zurich, where Irish internationals Jack McGrath and Hannah Tyrrell spoke candidly about suicide prevention and mental health.

“When my brother died in 2010 it caused a lot of anger and anxiety,” said McGrath. “I always felt that keeping my emotions in was the way to deal with it.

“When you got this knot in your stomach and are struggling to get up in the morning eventually you start talking and it is nearly like a gas valve releasing.

“It was very tough because we were very close. He would always stand in the same spot so when I run out I would always have a look over.

“After what happened to my brother I think it’s really important to be open about mental health,” he said.