IRFU has no plans to ban scrums in return to rugby 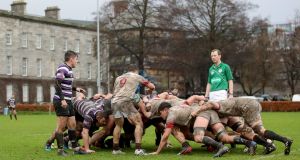 There are no suggestions, as yet, from either the Irish government or the IRFU to scrap scrums when the club game resumes in early September. Indeed a graduated return to scrummaging, akin to the club game in New Zealand and Australia, is part of the IRFU’s return to rugby guidelines for the club game.

A report in the Guardian has indicated there may be no scrums in “recreational rugby union” in the UK until after Christmas, albeit this is solely based on one comment from the UK sports minister, Nigel Huddleston.

The RFU has submitted detailed proposals for the return to full contact of grassroots clubs by the end of the year to the UK’s Department of Digital, Culture, Media and Sport.

Yet when asked whether recreational rugby would be back next season, Huddleston said: “I hope so but where you’ve got full contact, there are some sports - judo, karate, other full contact sports - where there’s particular challenges. I think inevitably there are going to be some changes. It could be broadly recognisable, but the reality is, for a temporary period of time, we’re going to have to probably see some changes.”

When it was suggested to Huddleston that there might be no scrums in recreational rugby until after Christmas, he replied: “Potentially, but we’ll have to see. It will be based on medical and other advice.”

In May, World Rugby said that doing away with reset scrums and eliminating “upright face-to-face” tackles would significantly reduce the risk of coronavirus transmission. The global body also advised a change of jerseys and headgear at half-time compulsory, banning huddles, and outlawing spitting.

However, there have been no suggestions from World Rugby that scrums should be temporarily scrapped at amateur or club level.

Furthermore, IRFU sources have indicated they have no plans to modify the game in any way at 15-a-side club level and believe they have enough choice for participants, be it tag rugby, touch rugby and 7s rugby.

As part of the Individual Contact Skills outlined in the IRFU’s Contact Stage Guidelines, beginning on July 20th and running until August 2nd, no live scrummaging (or mauling) is being permitted.

Even when team contact skills resume from August 3rd to August 16th, live scrummaging will be phased from 1v1 to 2v2, and 3 v a scrum machine and so on, before full contact is allowed from August 17th as a forerunner to friendlies being played from September 5th.

Explaining the Union’s guidelines for the clubs, their Medical Director Rod McLoughlin said: “The IRFU have had adopted a graduated return to rugby framework right from the beginning and we have asked clubs to return in the same way. That means going back in smaller groups for short durations and modifying the nature of the activity as we work towards the reintroduction of full contact over a period of time.

“Now we’re taking that same approach with our competitions. In other words, we must play games locally before we go All-Ireland. We’re attempting to limit the amount of travel and interaction because that limits the chance of the spread of the virus.”

To that end Energia, who have remained as sponsors of the All-Ireland League, will also sponsor the Community Series, for all of the senior clubs in the men’s and women’s game, which will also feature non-AIL clubs and begins on September 26th, running until December 12th.

Each province will have its own conferences and as well as trophies for each conference winner, final placings will determine which three teams qualify for All-Ireland cup competitions.

The Connacht conference will see the top three finishing teams qualify, whereas the top two from Conference 1 in Leinster, Munster and Ulster along with the Conference 2 winners, will qualify.

Each of the five 10-team divisions will remain unchanged from the abandoned 2019-20 campaign, and will run until May. Instead of being run off on a home and away basis, the five divisions will consist of nine games, followed by semi-finals and finals, with no promotion or relegation.

“What we’re trying to do is control our return so that we don’t become a contributor to a cluster or if we have an issue, it is limited by a graded introduction of normal competition and we pick it up early to limit further spread,” said McLoughlin.

“We’re not doing all this because we feel that rugby is a greater risk than other activities. Virus transmission is about 19 times less outdoors than indoors. We’re doing it to create as safe an environment within rugby as we can.”