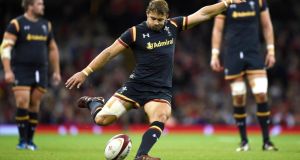 Warren Gatland has defended his decision to play Leigh Halfpenny against Italy, even though the Wales full-back had a bandaged right knee that gave way 15 minutes from the end, ruling him out of not only the World Cup but next year’s Six Nations.

The Wales head coach said in response to criticism from some former internationals – including the wing Shane Williams, who said Gatland had taken an unnecessary risk so close to the World Cup – that the bandaging was there at Halfpenny’s request rather than the medical team’s, to help him with his goalkicking, and that the cruciate ligament damage he sustained in the game was unrelated. The injury will rule out Halfpenny for six months.

“Leigh wore the strapping against Ireland the previous week and what happened to him was an unfortunate accident,” said Gatland, who has called up a wing, Eli Walker, to replace Halfpenny while the 99-cap – five of them for the Lions – scrum-half Mike Phillips was brought in for Rhys Webb, who was hit by knee and ankle damage against Italy and will be out for an as yet unspecified time.

“I spoke to the physio and the strapping was for the back of Leigh’s knee. It was light, not heavy, and it was something he had been wearing for three weeks to help with his kicking. He wanted to keep it on from a confidence point of view. There were half a dozen players strapped up at the weekend: you cannot protect everybody and it is always a balance between making sure they have enough rugby and keeping them fresh. If I had picked a different team against Italy, some players would have faced England having only had one match since last season.”

Gatland, who was speaking at the announcement that the Millennium Stadium will from January be called the Principality Stadium in a 10-year tie-up between the building society and the Welsh Rugby Union, will find out this week whether Liam Williams, Halfpenny’s stand-in at full-back in the past two seasons, will be fit for Wales’ opening match of the World Cup against Uruguay. He has not played since last season because of a foot injury.

“Liam has been running with us,” said Gatland. “He has been in a bit of pain but it has nothing to do with his injury. We fitness-tested him at the end of last week and his results were as good as some of the top players in the squad. We want him to start against Uruguay because he’s going to need some rugby but I hope not for 80 minutes because we have to think about the game against England the following weekend.

“It is devastating for Leigh and Rhys to pick up injuries now and you feel for them, but we have confidence in our squad. Liam is a different type of attacking player to Leigh and at scrum-half, Gareth Davies is in great shape and he has the potential to take the World Cup by storm, while Mike brings experience and he is a real competitor.

“I’m not going to dwell on the two injuries because they are gone now. I have to start thinking about being positive with the squad and with what we’ve got, and the players who are there and who can do a job for us. If we start feeling sorry for ourselves, it’s going to affect our squad and our preparation. It’s disappointing and sad but we have to move forward. Professional sport is about moving on.

“People are entitled to their opinions and I understand the disappointment of everybody out there, saying that certain players should have been protected, but you can’t do that to everyone. When there is a game you have to go out and win. We are happy about the strength of the squad and what they are able to deliver. Morale is not going to be an issue.”