Wales welcome back Jonathan Davies for All Black clash 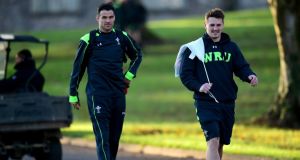 Wales have named their strongest side to face New Zealand at Cardiff on Saturday as they look for their first victory over the All Blacks for 64 years.

The centre Jonathan Davies, who missed the first two matches of the autumn series against Australia and Fiji because of a shoulder injury, came through contact training on Monday and will resume his centre partnership with his fellow Lion, Jamie Roberts.

Three other backs who missed Saturday’s laboured victory over Fiji because of injury, Leigh Halfpenny, Dan Biggar and Rhys Webb all return and Davies is the one change from the side that lost to Australia.

Wales went well up front against Australia and the hooker Richard Hibbard regains his place despite a public falling-out with the Wales management last week. He was released to Gloucester after being ruled out of the Fiji game with a foot injury but sat on the club’s bench against Harlequins last Friday. He came on eight minutes from the end to add to Wales’s outrage.

Hibbard met head coach Warren Gatland on Monday and the latter was sufficiently satisfied with the hooker’s explanation to declare the matter closed.