Walker had replaced Leigh Halfpenny before picking up hamstring injury 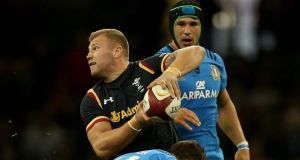 Wales have decided to bring in Gloucester flanker Ross Moriarty after winger Eli Walker was released from the World Cup squad because of a hamstring injury. Photograph: Dan Mullan/Getty Images

Ospreys wing Eli Walker has been released from Wales’ World Cup squad due to a hamstring injury.

Walker was called into the 31-man party earlier this month as a replacement for knee injury victim Leigh Halfpenny.

Gloucester flanker Ross Moriarty, whose father Paul and uncle Richard both played in the 1987 World Cup, has been called into the squad and will link up with Warren Gatland’s men on Tuesday, the Welsh Rugby Union announced.

A WRU statement read: “Due to the nature of the impending competition and the potential for his injury to extend into the latter stages of the pool stage, the decision has been made to release Eli at present.”

Walker, who made his international debut against Ireland last month, was called into the squad alongside Mike Phillips last Tuesday after Halfpenny and Rhys Webb were ruled out of the competition by injury.

Gatland’s men start their Pool A campaign on Sunday, with a match against Uruguay at the Millennium Stadium.