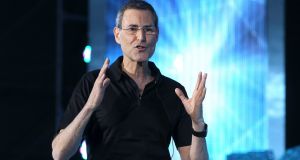 Uri Geller reckons he is the solution to England’s problems of collapsing late in games. Photo: VCG/VCG via Getty Images

Uri Geller has urged Eddie Jones to take him to the World Cup after declaring he is the answer to England’s psychological problems.

Jones is to recruit an expert to assist in fixing the recurring theme of his players imploding when in control of matches — a flaw that was exposed at great cost during the recent Guinness Six Nations.

A 31-point lead was thrown away in a 38-38 draw with Scotland at Twickenham on Saturday, while — earlier in the Championship — England were in full command against Wales in Cardiff only to surrender a 10-3 interval advantage as panic set in.

Last autumn, a position of strength of being 15-0 up against New Zealand also ended in defeat, while the first two Tests of the 2018 tour to South Africa followed a similar theme.

Geller, the famous spoon-bending Israeli psychic who in the past has worked with footballers, tennis players and Formula One drivers, believes his mind powers would transform England.

“If I can be with the team at the World Cup, they are going to win. Eddie Jones, if you hear me now, get me to meet the players,” Geller told talkSPORT.

“I’m a huge believer in mind power, in motivation and inspiration, and this is what the team is lacking.

“The invitation is open — Eddie if you’re listening now, I’ll get on a plane, fly over to wherever you are.

“All I need is 10-15 minutes with the players, I will definitely instil powerful energies in them and they will start winning. Energy does exist, this is not mumbo jumbo!

“I use visualisation techniques. It’s a subliminal hypnotic awakening of their mind to activate their adrenaline to make them win. There is no doubt they will win.

“Eddie you’re asking for a psychologist to come in? Well, if you didn’t know, my mother comes from Sigmund Freud’s family, and he was the most famous name in psychology. So get me there, let me psych them up and they will start winning.”

A more likely target than Geller for the role would be Dr Pippa Grange, the sports psychologist who was influential in helping England’s footballers overcome their penalty shoot-out fears at last summer’s World Cup.

Grange is reported to be leaving the Football Association, potentially making her available, and Jones has already indicated the solution he has in mind is offered by a woman.

“I’ve got one person that’s going to help us that’s a bit of an expert. I’m not sharing that name with you now. I haven’t used her before,” Jones said.

1 Monica Seles: The warrior queen who could have been the best ever
2 Valtteri Bottas takes Austrian Grand Prix as Lewis Hamilton is demoted to fourth
3 Donnacha O’Brien takes first Classic as Fancy Blue wins French Oaks
4 Eamon O’Shea: We spent quite a bit of time talking about older people rather than to them
5 Ferrari’s Charles Leclerc ‘will not take the knee’ before Austria GP
Real news has value SUBSCRIBE

Marcus Rashford ‘blessed’ to be fit again and back in the goals 17:57
Matheus Pereira inspires West Brom as they keep in touch with Leeds 17:44
West Ham edge closer to safety despite late Shelvey equaliser 16:50
Enable can’t reel in impressive Ghaiyyath at Sandown 17:01
Valtteri Bottas takes Austrian Grand Prix as Lewis Hamilton is demoted to fourth 16:22
Crossword Get access to over 6,000 interactive crosswords