Tales of the unexpected for France against the All Blacks

Outhalf to start against New Zealand, big guns return for the tourists 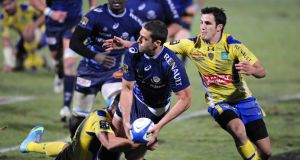 Castres’ outhalf Remi Tales will start against the All Blacks.

France coach Philippe Saint-Andre has taken a gamble in his team selection for Saturday’s clash with the All Blacks, picking the inexperienced outhalf Remi Tales in an untested pairing with Morgan Parra to face the world champions.

Tales, who will be paired with Parra for the first time, won his only two caps against the All Blacks this year as Les Bleus lost 30-0 and 24-9 in New Zealand in June.

Parra was included in the squad after his ban for punching an opponent in a Top 14 game was reduced from four to two weeks last month.

“I picked Morgan for his experience and his kicking skills,” Saint-Andre explained.

“He has a lot of caps (51). Jean-Marc (Doussain) is only second or third kicker at Toulouse. That played a part in my choice.”

France, who have lost their last seven games against New Zealand, including a 8-7 defeat in the 2011 World Cup final, will need to play boldly, according to Saint-Andre.

“We will have to be intelligent and focused defensively,” he said.

“It is important that the players believe in themselves, that they play with passion and intelligence, but most of all they must release the handbrake.

“There is obviously some fear when you face New Zealand. We should build on that fear, it must not annihilate us. We will need to run and be creative.”

Whatever the result, Saint-Andre hopes that his team will “show they can compete with the best team in the world”.

“We want to be actors in that match, not just spectators.”

To do that, the manager has picked flanker Wenceslas Lauret, who has been in impressive form with Biarritz in the Top 14.

“He is fast and solid, said Saint-Andre. “We know that against New Zealand you need to win the duels in the impact zones. Defence will be crucial.”

New Zealand coach Steve Hansen has named a full-strength side for the match, including the most experienced All Blacks pack ever fielded.

Having put out an experimental side for the 54-6 win over Japan last week, Hansen has recalled the team‘s most battle-hardened players for the match at Stade de France, with captain Richie McCaw switching back to openside flanker.

Number eight Kieran Read and blindside flanker Liam Messam complete a fierce back row, as the All Blacks seek to extend their winning streak to 12 this season and notch a fourth win for the year over Les Bleus after whitewashing them 3-0 at home during the June internationals.

The squad boasts 853 test caps in the starting 15 with another 112 caps on the bench.

“The full squad has come together well after the Japan test and are united with a common purpose - to play well on this . . . European tour and put in performances that we can all be proud of,“ Hansen said.

“But we know this weekend‘s test won‘t be easy - the French will come at us with real physicality, passion and something new.“

Lions squad set to have a greater spread than four years ago 22:00
Warren Gatland hopeful that Lions itinerary will be finalised this week 22:00
Blackmore back among the winners at Fairyhouse 22:00
Elite athletes still required to undergo 10-day mandatory quarantine 20:32
Klopp says Liverpool need ‘perfect performance’ to overcome Real deficit 20:00
Crossword Get access to over 6,000 interactive crosswords