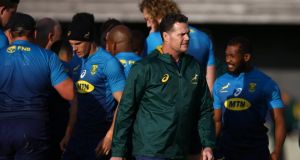 There are a few words you might choose to use about England’s pack before you land on the one South Africa’s Warren Whiteley settled on. “Nice” was what Whiteley said when he found out England had picked Tom Curry, Brad Shields and Mark Wilson to play in their back row at Twickenham.

“Nice.” He sounded like he was reading through a steakhouse menu. For anyone else a cup of tea counts as “nice”, or a slice of cake, or a comfy chair, not an 80-minute Test match scrap against an English pack at Twickenham.

But then Springboks have strange appetites, and, judging by the team they are putting out on Saturday, they have come hungry.

Whiteley is one of seven changes the head coach Rassie Erasmus has made to the side that lost by two points to the All Blacks in Pretoria three weeks ago. Some of those changes have been forced on him because this match falls outside World Rugby’s international window. So he cannot pick Willie le Roux, Faf de Klerk or Francois Louw, which means he has got a couple of greenhorns in his XV, Ivan van Zyl at scrum-half and Damian Willemse at full-back.

But in front of them, he has still been able to assemble a hefty set of hardened forwards and a formidable set of replacements too.

Whiteley is at No 8, Duane Vermeulen at No 7, and Siya Kolisi at No 6. In front of them are Eben Etzebeth and Pieter-Steph du Toit, who has moved from the flank back to lock. With Frans Malherbe, Malcolm Marx and Steve Kitshoff in the front row, the pack have 293 caps between them. England’s forwards have only 163, and 93 of those belong to Dylan Hartley.

Eddie Jones is obviously worried about the lack of leadership experience in his team, which is why he has brought in Will Carling as a mentor but that is not a problem Erasmus has. Etzebeth and Whiteley have both captained the team, and Kolisi leads them now.

On the bench Erasmus has two towering locks, Lood de Jager and RG Snyman, and a couple of powerful props in Wilco Louw and Thomas du Toit, who tips the scales at over 21 stone, which makes him one of the heaviest players the Springboks have ever picked.

“I think it is going to be a very tasty contest upfront,” said Aphiwe Dyantyi, with the palpable relish of a man who will watch the contest from out on the wing.

“Spicy,” agreed Whiteley. “I don’t think they’re a team that will shy away from physical confrontation. So in terms of set-pieces it is going to be a big battle.”

Erasmus is taking a “speak softly and carry a big stick” approach to the Test. He made sure to talk up England’s pack even though he admitted it contained “a lot of new faces” and “people you don’t see every weekend at Test match level”.

He even argued England’s inexperience could work for them. “I wouldn’t say it is a weakness, I think maybe more not knowing them so well from our side might be to their advantage.”

The point, Erasmus said, is that “all the Premiership teams have wonderful forward packs”, and “the moment you underestimate those new names, they tend to bite you”.

Erasmus says South Africa made that mistake last summer. “Tom Curry we didn’t know that well, we knew he was good over the ball, knew he had a twin brother – but that’s about all we knew. And then he really got stuck in there at Newlands. He was one of the big reasons we lost that Test match. So that’s why I’m really very nervous of new faces. I don’t know [enough] to say there might be a weakness with, for example, the props.”

And besides, he added: “I guess if I say they are thin there, England will say that between 9 and 15 we only have two or three caps.”

In the long term, Erasmus says, South Africa are “in the process of evolving from more than just a grunting, hulking, running-over-you sort of team”.

Judging by the way they are talking about Saturday’s match, they are not in a hurry to move on just yet.