Joe Schmidt names Ireland side to face Italy in Chicago

Rhys Ruddock to lead Ireland at Soldier Field on Saturday 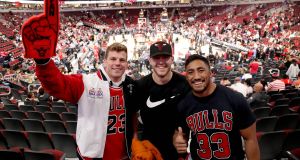 Joe Schmidt has rung the changes for Ireland’s first of four Tests this November against Italy in Chicago on Saturday, although despite keeping most of the frontliners back for the ensuing games against Argentina and New Zealand, five of the starting XV which completed an historic series win in Australia are retained.

As expected, Joey Carbery makes his fifth start at outhalf, with his one-time Leinster halfback Luke McGrath to partner him, while Jordan Larmour and Tadhg Beirne also make their first Test starts after six and two appearances off the bench.

There are a couple of potential debutants off the bench as well in Ross Byrne, an unused sub in that third Test, and Ulster’s newly acquired utility back Will Addison.

The five players retained are Jack McGrath, Niall Scannell, Jack Conan, Jacob Stockdale and Bundee Aki, who forms a potent midfield partnership with Garry Ringrose, while Andrew Conway – so unlucky to have his Australian tour ended in the first quarter of the first Test – completes the back three. It is a relatively inexperienced but potentially exciting Irish selection.

Andrew Porter will make his third Test start, while Beirne is partnered by Quinn Roux. Rhys Ruddock captains his country for a fifth time, and is joined in the backrow by Josh van der Flier and Jack Conan.

Ruddock was always the likely choice to captain the side once Rory Best, Johnny Sexton and Peter O’Mahony were left at home.

“Rhys has had some real frustrations with injury,” said Schmidt. “He was really impressive during the Guinness Series last November and led the team superbly in Japan the summer before that. He is a workaholic on the pitch and prepares incredibly well off it, so he’s an ideal leader in the absence of Rory, Pete and Johnny.”

Regarding the potential debuts of Byrne and Addison, Schmidt said: “Like any of the replacements, I think the coaching group are really looking forward to seeing the players off the bench slot into the team as seamlessly as possible and for them to bring the strengths of their provincial form to the game on Saturday.

“Ross manages the game well, kicks and passes well but he’s also playing and carrying the ball with increasing confidence, which is what you want to see – players growing their game.

“Playing for Ulster, Will has shown the acceleration and footwork that we know he has. His versatility is a real asset off the bench and his passing and kicking skills make him a threat when carrying or transferring the ball. He slotted in well when he trained with us in Melbourne and we’re looking forward to seeing him bring that onto the pitch in Chicago.”

1 Jack Nicklaus’ Trump endorsement leads to avalanche of dismay
2 Six Nations - France v Ireland: Kick-off time, TV details, permutations, team news and more
3 World Handicap System: What is it? How does it work? Will my handicap change?
4 Here is your handy guide to sport on television this week
5 Return of Conor Murray’s box kicking could exploit French vulnerability
Real news has value SUBSCRIBE