Simon Easterby has been impressed by performances of Ulster centre 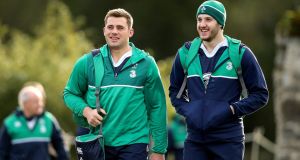 CJ Stander and Stuart McCloskey on their way to an Ireland training session at Carton House on Wednesday. Photograph: Cathal Noonan/Inpho

Powerful Ulster midfielder McCloskey has forced his way into the senior squad for the first time, and could yet feature at the Aviva Stadium.

Even if head coach Joe Schmidt sticks with the tried and tested centre pairing of Robbie Henshaw and Jared Payne, McCloskey could make his Test debut from the replacements’ bench.

“I think Stuart has shown he can cope, he’s played against some big teams this year,” said Easterby of McCloskey.

“Toulouse weren’t a small team if anyone was up in Ravenhill earlier this season. I certainly was and I thought he did really well that day. He’s gone well in the physicality stakes against Saracens too.

“So he’s a big man and so are Wales. They’ve got threats across their back line, the same kind of size as Stuart.

“He’s well able to step up and that wouldn’t be an issue for him if he were to be selected.”

Schmidt has branded Wales “the biggest team in the world” in gearing his side up for another clash heavy on the midfield collisions.

While both Connacht’s Henshaw and Ulster’s Payne have featured at fullback for their provinces at points this term, Schmidt’s safe selection would be to pair both in midfield on Sunday.

A debut for McCloskey could certainly boost the hosts’ physicality, and Easterby believes Ireland will see new faces sooner rather than later.

Munster flanker CJ Stander is another itching for his first Test action, and Easterby is pleased with the new boys’ attitude.

“Guys have come in and trained really well,” said Easterby. “We’ve got to have a balance in trying to have some continuity from the World Cup.

“If guys are playing well and we feel they will add value and be better than the guys who have gone before, then we will pick them.

“I think a few guys have really put their hands up and that’s offered us some headaches in selection.

“We want to be coming out of selection meetings with a hard choice to make, and the players have been making it really competitive.

“We’re not as experienced as Wales, in terms of their match day 23. I think they’ve got more than 900 caps. We wouldn’t be as strong as that, but that’s not an issue.

“We’ve got enough experience through the spine of the team, and that allows us to pick players with a few caps or if they haven’t been capped before.

“Those experienced guys around them can support them and someone’s got to start at some point, win their first cap at some point.

“It might be this week, it might be next week, but I’m sure we’ll see guys in the next couple of weeks get their opportunities.”