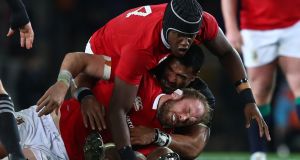 Lions secondrow Alun Wyn Jones takes a blow to the head in a tackle from All Blacks backrow Jerome Kaino during the third Test at Eden Park in Aukland. Photograph: Hannah Peters/Getty Images

Maybe they hope these ugly incidents – when neither, officially, suffered a concussion – are forgotten over much needed summer holidays.

Either way, with no Olympics or major soccer tournament taking place in 2017, this old school rugby tour reborn as a commercial juggernaut really needed the HIA and independent identification of concussions to run smoothly.

That, quite clearly, has not been the case.

Questions were raised about Ben Smith’s return to training but that issue was medically defined as an inner ear issue. Fine.

Jared Payne was forced off tour due to migraines that may or may not be related to concussion.

Jones seemed to have been sparked early in the first Test with many putting his lacklustre performance down to a head knock. The Lions denied this was the case and re-selected him without adhering to any protocols.

All Blacks captain Kieran Read took a heavy head blow in the first half while tackling Anthony Watson. He returned to the fray after treatment on the field.

No reason to question the New Zealand medics. The captain continued.

Johnny Sexton was unhappily forced off after 48 minutes of this third Test for a HIA. He passed it and returned in the 55th minute.

Then it happened. The worst case scenario – well, actually, that’s further down the road – with Wyn Jones so groggy that Romain Poite intervened to demand a HIA following contact with Jerome Kaino’s forearm on 49 minutes. Wyn Jones passed the HIA (with an independent doctor) but the pre-planned introduction of Courtney Lawes seemed to end his involvement in the series.

Not so. Warburton took what seemed concussive, and truly awful, contact while flinging his body into a tackle around 65 minutes.

“I’m all right,” he told Poite, but the French referee disagreed: “You need to come for a check.”

As Warburton was “easily” passing his HIA (he said so afterwards), Jones temporarily returned to a re-jigged Lions pack.

They call them warriors. Gladiators is more apt.

The HIA’s ability to detect concussion is coming under increased scrutiny because it arguably increases the danger to players who, like Warburton and Jones, sustain head blows and appear semi-conscious or stumbling about in search of equilibrium, yet they can rejoin the battle by passing the test.

Now, the governing body has not been idle. World Rugby are actively examining ways to solve this HIA riddle. On the issue of concussion, chief medical officer of World Rugby Dr Martin Raftery will continually point you towards the dangers of riding a bicycle.

“You can never eliminate risk in life,” Raftery told The Irish Times. “That’s what people need to understand. Rugby’s responsibility is to minimise that risk.”

However, in the past year questionable decisions to allow players continue in games after passing HIAs and non sanctioned outcomes thereafter have been explained away as “isolated incidents”.

“We will be releasing a new process around how the [HIA case] reviews are done.”

“If anybody can give me the magic bullet I will take it with open arms,” added Raftery. “There is no perfect diagnostic test. We know it’s flawed but what can we do? We’ve got to use what’s best available.”

In the meantime, the next generation of rugby players witness their heroes suffering head blows in slow motion before rising to play on, and on.

There is a dark end to all of this. Immortality does not beckon.