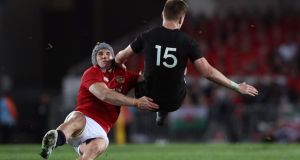 Jonathan Davies tackles Jordie Barrett during the Lions 15-15 draw with the All Blacks at Eden Park. Photograph: David Rogers/Getty

Crucial handling errors would have ruined his tour if the series had been lost but this Welsh engine’s constant desire to carry over gainline allows him to leave New Zealand with an enhanced reputation. 5/10

Seemed fragile when turned and Barrett’s boot was determined to find Julian Savea in the air, but Watson did show enormous bravery and cool footwork to swerve ‘The Bus’ in a tense late moment. 6/10

Torpedoed out of the line twice to put Jordie Barrett on his back in a clear defensive tactic that brought this seemingly unstoppable All Black offence to a shuddering halt. 8/10

A calamitous opening 15 minutes when he kicked out on the full, threw an intercept that led to a 90-metre swing and put a high shot on Beauden Barrett that could have been a yellow card. Recovered magnificently to kick four goals. 7/10

Some brilliant contributions sullied by the Laumape try - when out jumped by Jordie Barrett - while some sloppy handling on 57 minutes that gifted New Zealand valuable possession and territory. 6/10

Justified selection with restarts and two turnovers after shipping plenty of late nudges. His tackle on Jerome Kaino down the stretch proved the HIA had been passed and he was sufficiently recovered from a turned ankle to make Ben Te’o a peripheral figure. 7/10

A kicking masterclass, again. The Lions were under so much pressure that he was forced to find touch from his own 22 time and again.Overshadowed by Aaron Smith, who had better ball to work with. 8/10

Maybe he needs to cough up a penalty of two to get the juices flowing. Went from four conceded last week to zero but must shoulder some responsibility for the scrum issues. 5/10

Nowhere to hide. Made his tackles (eight) but there were two arguably game defining throws to the tail of the lineout - in the 51st and 70th minute - that were not straight. Both times the air was visibly sucked out of the Lions packs. 4/10

Some huge carries yet again that inched the Lions through what otherwise seemed an impregnable black wall. Joe Moody seemed to have his number when locking horns in opening 40 minutes but the scrum solidified in the third quarter. 7/10

A phenomenal talent with immortality beckoning, probably the next England and even Lions captain but on this day Whitelock and Retallick ensured he was the third best lock on show. 7/10

A man needs protecting from himself. Jaw smashed by Kaino’s forearm, a HIA - which he presumably passed - and yellow card followed. But AWJ was then sent back in when a sparked Warburton was away “passing” his HIA. Ridiculous and damning. 5/10

Warrior, leader etc. A lasting example has been set for young flankers all over the world - when you are clearly concussed, pull yourself up and immediately put your head in harms way. “I’m alright,” he told Romain Poite as the French referee forced him off. Courageously passed the HIA and returned to the fray. 6/10

Strong contender to follow Jeremy Davidson (1997) into the history books as Lions MVP. One of the few men capable of matching the All Black forwards on the gainline but Leinster, as usual, will pay the price of what looks a mangled shoulder. 7/10

Herculean performer who immediately covered the pre-tour loss of Billy Vunipola with the top tackle count (nine) and two massive turnovers but a mark is lost for the penalty he surrendered before half-time. 8/10

Props arrived to fix the scrum and CJ Stander carried in a manner that the Lions were screaming out for. Rhys Webb put some pace on the ball late on. 6/10

Drawn series in New Zealand. What an achievement. After coming in for horrendous abuse - from Steve Hansen down to the Kiwi tabloids - Warren Gatland has muscled his way into the conversation to succeed Hansen after the 2019 World Cup. 8/10