Shane Williams ‘more shocked’ than anyone by Lions call-up 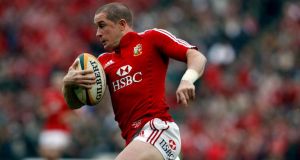 Shane Williams, seen here scoring for the Lions against South Africa in 2009, has been called up to the squad for the game against the Brumbies. Photograph: Dan Sheridan/Inpho

The British and Irish Lions have drafted former Wales wing Shane Williams into their team for Tuesday’s clash against the Brumbies in Canberra.

The shock call-up sees him feature in a team that also includes England backs Christian Wade and Brad Barritt, who were also called up yesterday as injury cover. Neither player has yet arrived in Australia.

All three have been included amid ongoing concerns over the hamstrings of both Wales wing George North and centre Jamie Roberts, who limped out of yesterday’s win over the Waratahs.

The Lions will be captained on Tuesday by Ireland hooker Rory Best, while Rob Kearney will make his first start of the tour at fullback. Seán O’Brien will start in the backrow and there will be another chance for Simon Zebo to feature, this time off the bench, after his impressive first cap in Sydney on Saturday.

Scrumhalf Conor Murray is also among the replacements, but it is Williams’s inclusion that will dominate between now and Tuesday.

“We just said we needed Shane for one game,” Gatland said. “We spoke to Shane and just said the proviso is he comes in Monday, trains, plays on Tuesday and he leaves the squad on Wednesday. He was perfectly happy with that.

“The accolades have been given to Shane. He played in the last Lions Test match against South Africa, when they won. He’s in pretty good nick. We know that he is fit and training, and I am sure he will come and do the jersey proud and do himself proud.”

Williams, who scored a record 58 tries in 87 Tests for Wales and toured with the Lions in 2005 and 2009, is due to be a radio analyst for the Test series.

“It was completely out of the blue. I am more shocked than you are,” Williams told talkSPORT today. “I never thought I would ever get this opportunity again, but if me contributing on Tuesday is going to help the Lions squad be successful in the three Tests then that is what I am here to do.

“Rob Howley (Lions assistant coach) phoned me. It is still sinking in. I am over the moon, and what I will do on the field is give my 100 per cent effort and commitment and do whatever it takes to help the team out. I have been playing in Japan over the last 12 months. Fitness is not going to be an issue. If I had any doubt whatsoever that I wasn’t capable or good enough then I would have said no, because there is no way I will let the Lions down.

“I get into Sydney on Monday morning, and I am training at about half past 10.”

The Lions are unbeaten five games into their 10-match tour, and Gatland is upbeat about his team’s prospects against a Brumbies side viewed by many pundits as potential Lions tamers.

“There is no way we are going out on Tuesday sacrificing a game. The motivation is there,” he added. “I am sure those players who take the field on Tuesday will be incredibly motivated to want to continue this tour unbeaten, and there is still that opportunity for players on Tuesday to put their hand up and say they want to be part of that Test XV or Test 23.

“Everyone has to have the belief that you can go out and perform on Tuesday, put your hand up and get selected for next Saturday. We’ve kept our momentum, and it has been really pleasing how the players have done that and responded to the challenge. I am sure the players who take the field on Tuesday will feel a massive responsibility to go out there and continue what we’ve been doing.”