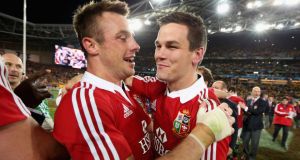 English Premiership Rugby has backed proposals for a newly integrated global season that have been tabled by the International Rugby Players’ Association .

The IRPA wants the northern hemisphere season to start a month later and run from October to June, with summer international tours to take place in the last three weeks of July.

The proposal would come into force for the 2015-16 season, following the Rugby World Cup in England, and is understood to have the support of the Aviva Premiership bosses.

The IRPA states that the 2017 British and Irish Lions tour to New Zealand would benefit from its plan because the Super Rugby season would be over, allowing the provinces to field stronger teams for the tour matches.

The southern hemisphere unions, the RaboDirect PRO12, the French Top 14, the Six Nations and the International Rugby Board are now being urged to consider the proposal.

New Zealand’s World Cup-winning captain Richie McCaw described the plan as “a game-changer for professional rugby” and those sentiments were endorsed by Ireland and Lions outhalf Jonathan Sexton.

“We see this initiative as beneficial for the global game” Sexton said. “From a player perspective, we urge our leaders to get in a room together, take a positive attitude and see what can be done.”

The September-October window for the World Cup means that midweek Premiership matches in the 2015-16 season have already been mooted as a possibility, which raises concerns within the IRPA over player welfare.

IRPA chairman Damian Hopley said: “We’re in a unique position. For the first time since rugby went professional, the major northern and southern hemisphere competition and commercial structures are on the table at the same time.

“This is the ideal time to seriously consider change that will secure player welfare initiatives.”