Schmidt to stick with swinging door policy at centre

Gerry Thornley gives his assessment of Joe Schmidt's plans for the game against Wales. 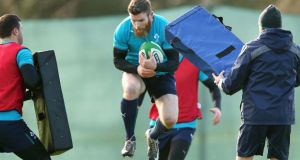 There is method to the swinging door policy at No 12.

A jaded Luke Marshall will sit on the bench for Ulster against the Ospreys on Friday night as Gordon D’Arcy stares down Jamie Roberts the following day in Dublin.

“It’s good to have Gordon D’arcy back but I thought Luke Marshall gave us a couple of good turnovers,” said Joe Schmidt, the man who has kept us all guessing over who partners Brian O’Driscoll in midfield.

Like November, Schmidt revealed today that he always planned to play Marshall against Scotland and D’Arcy on Saturday against Wales.

The decision on who makes the cut for Twickenham on February 22nd – there is no room for an inside centre on Schmidt’s bench – will depend a lot on whether D’Arcy can replicate the stunningly efficient form he displayed against New Zealand – a game Schmidt labelled his best at Test level.

But the most interesting aspect of this latest visit to Ireland’s training camp in Co Kidare was what Paul O’Connell thought of Rob Penney’s imminent departure from Munster to take up a coaching job in Japan.

“Shock. I suppose I’d heard rumours but didn’t know a lot about it. It’s disappointing but I suppose he has got to do what is best for him and his family.

“Hopefully now Munster can put something in place fairly quickly that will continue the improvements that have happened under Rob in the last two years.

“It puts him back closer to New Zealand and I know his (two sons) are close to the age of university. They’ll probably go to university back home and it means Rob will be closer to home.”

O’Connell offered up current Munster assistant coach Anthony Foley as his candidate to become the only indigenous head coach in professional rugby in Ireland.

“I haven’t given it a lot of thought but I presume Axel (Foley) will put his hand up there. He has spent a lot of time waiting for the opportunity.

“But there will be a lot of interest in the job, which will be a good thing for Munster.”