‘At the end of the day we wanted it more than they did, that was evident by the end of it’

Reaction from Gerry Thornley and Liam Toland at the Aviva stadium. 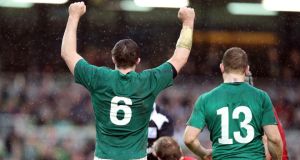 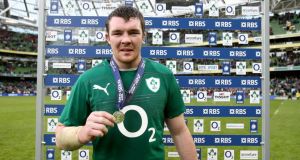 Relentless flanker O’Mahony overwhelmed much-vaunted Sam Warburton at the pivotal battle of the breakdown in Ireland’s 26-3 demolition of Wales on Saturday.

Head coach Warren Gatland was forced to concede Wales had few answers, and had struggled for emotional intensity.

“A lot of that has to go down to the fight and the want that we showed,” said O’Mahony. “At the end of the day we wanted it more than they did, that was evident by the end of it. I don’t think the scoreline flattered us, but we fought for everything.

“That is where we need to be at, we need to be fighting for every 50:50 ball, everything that goes on the ground. They are the ones that make the difference.”

O’Mahony praised forwards coach John Plumtree for his new raft of ideas and methods that had elevated Ireland’s driving game to new heights in their two-straight Six Nations wins so far this term. But he also laid credit at the door of line-out gurus like captain Paul O’Connell and hooker Rory Best, for their endless hours of analysis and meticulous tinkering.

“John has put a big emphasis on our maul and our lineout, he wants us to be a great mauling and line-out team,” said O’Mahony. “You’ve guys there like Paul O’Connell, Devin Toner, Rory Best, Sean Cronin and Dan Tuohy - these guys spent an awesome amount of time on laptops and a savage amount of work.

“Credit has to go to all of them. John has put in great structures put the players are really driving that on.”

Ireland will now chase the Triple Crown when they face England at Twickenham on February 22nd.

O’Mahony said captain O’Connell sought a “statement” performance from Ireland against Wales that his side duly delivered.

Despite Ireland’s start to the tournament, O’Mahony believes it is too soon to be talking titles.

“You all know the way Paul gets stuck in and he’ll lead from the front always, he was looking to put a statement in and it was a good one,” said O’Mahony. “It was a good way to start for us, it was a great team performance but we won’t be getting carried away.

Ireland will reconvene in a training camp later this week ahead of the first fallow weekend of the Six Nations sequence.

With two weeks to prepare to face England, head coach Joe Schmidt has plenty of time to switch the gameplan again.

The Ireland boss claimed that was entirely based around expecting horrid weather that never quite materialised.

Schmidt is canny enough to play down his influential interventions at every turn, and O’Mahony said it is too early to know just how Ireland will approach their Twickenham showdown.

“The weather justified a lot of what we did (against Wales),” O’Mahony added. “We knew the maul was going to be important in a tight game. We could see that coming earlier in the week with the forecast so that played a big factor. We haven’t looked at England yet so it will be interesting to see how we approach that.”