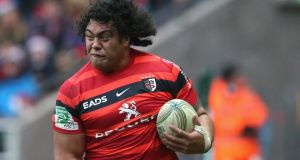 Samoa will be without the formidable services of Toulouse prop Census Johnston when they face Ireland. Photo: David Rogers/Getty

Joe Schmidt spoke yesterday about “losing control” of Johnny Sexton since the outhalf moved to Paris. Well, Samoan head coach Stephen Betham has pretty much no say over 28 of the 30 men cobbled together ahead of tomorrow’s defining match of their November tour.

That’s because 10 are attached to French clubs, another 10 are in England, four play in New Zealand, four in Japan with two still based in Samoa.

The attritional European season has denied Ireland Sexton for tomorrow’s Test match but the visitors are in a far worse state. Five of their most influential players have been ruled out through injury while Seilala Mapusua, Alesana Tuilagi and Connacht’s briefly contracted James So’olialo weren’t considered for selection.

Chief scorers
That’s significant as Tuilagi and So’olialo were the chief scorers in last June’s 27-17 defeat of Scotland.

After afternoon training in Blackrock, Betham released a team to face Ireland without captain Gavin Williams so Northampton scrumhalf Kahn Fotuali’i will lead them in the Stade Francais centre’s injury -enforced absence.

When asked about Census Johnston, Betham conceded the Toulouse prop picked up a knock during last Saturday’s defeat to Brive.

“We were hoping he would be fit but after a few tests today he was about 80 per cent so at this stage we’d rather save him until the next match and play someone who is 100 percent.

“We know what Census brings so it gives us a chance to look at someone else.”

Not that Jack McGrath, Ireland’s only new cap, will be having a free ride at scrum time as Leicester Tigers’ 124 kilogram, 6ft4in Logovi’i Mulipola comes in for a 14th cap at tighthead.

Williams’ carrying is a significant loss but Sale’s Johnny Leota and Northampton’s George Pisi will hardly lack for physicality in the midfield collisions.

Watching them train yesterday, they looked keen to spring most of their attacks down the outhalf channel with Fotuali’i switching to first receiver on several occasions.

At least they profited from a gap in the IRB Sevens series with fullback Fa’atoina Autagavaia recruited from Samoa’s highly rated other rugby squad.

Ranked seventh
It was also suggested to Betham and Fotuali’i that Samoa, yet again, have been stung by the IRB scheduling list. Despite being ranked seventh in the world, one ahead of Ireland, tomorrow is their only tier one fixture this month.

They face the French Barbarians next week before travelling on to Georgia.

“In an ideal world we would like to play those tier one teams,” said Fotuali’i. “I think the only way to get better as a nation is to play the best.”

Leo, on twitter, recently labelled it a “travesty” that Samoa are not treated like other top eight nations.

Did the IRB give Samoa a reason for denying them three serious Test matches in November?

“We only have five days to put different patterns in place so it’s hard task but these boys come to play for Samoa and we are not there to make up numbers.”

Minute’s silence
The IRFU have agreed to a minute’s silence before kick-off in memory of Peter Fatialofa. The legendary Samoan prop in the 1991 World Cup victory over Wales passed away last Tuesday. “News of his death was a shock to the entire squad,” said Samoa manager Sami Leota.

“We will be dedicating the game on Saturday to Peter’s work not only for Samoan rugby but the wider community with his charity work,”