Sam Warburton not sure which England will show up at Millennium

Gerry Thornley and Gavin Cummiskey look ahead to the Six Nations opener as Wales welcome England to the Millennium Stadium. 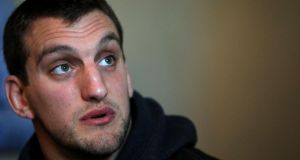 Sam Warburton may be winning his 50th cap this evening but in one sense the Wales captain will be stepping into the unknown. Rugby at the top level, he feels, is going through another stage of evolution and he is not sure what to expect from England.

Since Warren Gatland took over as the head coach at the end of 2007, Wales have been the most successful team in Europe, with three Six Nations titles and a fourth-place finish in the World Cup. When they moved into the Millennium Stadium at the end of the 1990s, they tended to put out the welcome mat for visitors but in the past seven seasons they have lost only four championship matches in front of their own supporters while winning 14.

They are at full strength going into Gatland’s eighth Six Nations campaign, settled in selection and playing style, while England are beset by injuries and are without two of their leaders in defence, Brad Barritt and Owen Farrell.

Their back division has an atypically adventurous aura to it and bookmakers report that punters, anticipating an arm-wrestle rather than a talent show, are lavishing their money on a home victory.

Warburton does not believe the contrast in the style of the two sides will be marked. Ireland showed last season that one way to beat Wales was to play a no-frills territory game, forcing them to run from deep and holding ball-carriers in a choke tackle. New Zealand overcame them in the autumn by chip-kicking behind the onrushing defence and winning the race. In Jonathan Joseph, Jonny May and Anthony Watson, England have chasers with instant acceleration.

“The game is slowly changing,” said Warburton. “Teams are kicking a lot more now. A couple of years ago, ball in play was a big factor but now the kicking game is among the top three aspects [that influence a match].

“I remember watching England a couple of years ago against Australia and being impressed by the way they went into the contact area so fiercely that they forced the Wallabies to adopt a kicking game. When it comes to England’s style, we have to prepare for both and it is now about mixing things up.”

Roberts was largely a spectator in Dublin last year as, when Wales did manage to get into their opponents’ half, they had little set-piece possession, struggled to get the ball away quickly from the breakdown and were held up in the choke tackle. The choke is a speciality of the England flanker James Haskell.

“Three or four-second tackles are a win nowadays because you have slowed the ball down,” said Warburton. “If you go for a low-leg chop and no one comes in over the ball, it will be away quicker than if you went higher and tried to choke someone. England are effective in that area. It will be a big way for them to stop our possession and Haskell is an extremely strong guy.”

1 Horse Racing Ireland make their four tracks available to government
2 Iggy Clarke cherishes the friendships he made while playing for Galway
3 A beautiful, happy accident - Moneyball is the best sports movie ever
4 Tokyo Olympics likely to start on July 23rd 2021, reports
5 Nicholas Quinn: ‘Swimming became how I dealt with grief’
Real news has value SUBSCRIBE