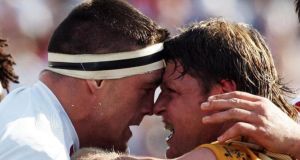 Standing at 6ft 5” and weighing 20 stone Andrew Sheridan was a monster even by the pumped up standards of modern rugby, especially when you consider he plied his trade as a loosehead prop.

And how best to use this superhuman, hulk-like ability? Well, by destroying Australian frontrows of course.

Sheridan made his name in an England shirt in a 2005 Autumn International after producing a man of the match performance which saw Al Baxter and then Matt Dunning forced off the pitch having been bulldozed into submission.

Two years later and he was at it again, this time in the 2007 World Cup quarter final in Marseille.

Underdogs England had Jonny Wilkinson’s boot to thank for their 12-10 win but it was Sheridan, along with Mark Regan and Phil Vickery, who laid the foundations for victory.

Throughout the English pack had Australia on the back foot at the Stade Veledrome, the trio of Lewis Moody, Nick Easter and Martin Corry capitalising on the tight five’s good work and nullifying the threat of Georges Smith and Gregan.

Time and again Sheridan pulverised Dunning and Australia forwards coach Michael Foley, who had spent months working on scrummaging techniques to negate the threat posed by the Sale Sharks forward, could only watch on as his plans were trampled all over.

Ultimately Sheridan’s hulking, creaking body was his downfall and he had to quit Toulon with a neck injury last year.

Off the pitch the big man is a singer songwriter and in 2010 released his debut album, ‘Where we go from here’, which is probably Australia’s frontrow were asking after Sheridan was finished with them.

Katie Taylor out to banish all doubts in rematch with Delfine Persoon 17:56
Trick or treat: Ireland set for Halloween showdown with France in Paris 17:29
Tiger Woods to make PGA Tour return at Memorial Tournament 16:10
Alex Hales remains out in the cold as England name squad to face Ireland 15:23
Former Waterford boss Alan Reynolds joins Ireland Under-21 set-up 13:09
Crossword Get access to over 6,000 interactive crosswords