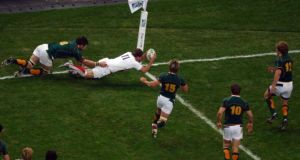 Mark Cueto’s try in the 2007 Rugby World Cup final against South Africa was disallowed by the TMO. Photograph: Getty

With an aging squad filled with creaking legs and missing talisman Jonny Wilkinson, the defending champions limped past the USA in their opening game before being completely eviscerated 36-0 by South Africa in their second.

But things got better. Brian Ashton’s side bullied Australia up front to eke out a two point victory in the quarters in Marseille, before Wilkinson’s boot helped England stun the hosts France in the semi-final.

Standing in their way once again though, were the Springboks.

South Africa began the final as massive favourites, but as the game moved into the second half England remained in touch, with Wilkinson’s one penalty being trumped by three from Percy Montgomery.

And then, the moment. Matthew Tait sliced open the Boks defence and hurtled towards the line. Andy Gomarsall moved it quickly to Mark Cueto on the left wing who dived through the tackle of Danie Rossouw and over the line.

Alain Rolland called for the TMO. It was tight. Impossibly tight. No try.

England were instead awarded a penalty which Wilkinson slotted, and roused by Cueto’s diving effort they had the momentum.

But the Springbok nut was impossible to crack. Montgomery’s boot kept a huffing and puffing England at bay, guiding his side to a 15-6 win.

But if Cueto’s ghost try had stood, it all could have been so different.