RWC moments: The All Blacks leave it to Beaver 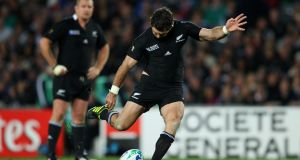 Flyhalf Stephen Donald of the All Blacks kicks a penalty in 2011 Rugby World Cup Final between France and New Zealand in Auckland. Photograph: David Rogers/Getty

Stephen Donald kicked the winning penalty that secured New Zealand an 8-7 victory over France in the 2011 World Cup final on home soil, bringing to an end a 24-year wait to win the Webb Ellis Cup for a second time.

Donald wasn’t part of the original New Zealand squad but a succession of injuries to Dan Carter, Colin Slade and Aaron Cruden saw him take centre stage. He was immortalised subsequently in a film called The Kick, which chronicled his life in rugby and that fateful moment in the final. It could equally have been titled as Leave it to Beaver, the outhalf’s nickname.

Donald was fishing whitebait on the Waikato river when his phone started to hop. He explained: “Ted’s (New Zealand coach Graham Henry) number came up a few times, I didn’t have it saved so it wasn’t until Mils (Muliaina, New Zealand fullback) rang me and said ‘Ted’s trying to get you up to Auckland; you might need to get in touch with him,’ that I returned the calls.”

Carter damaged a groin place-kicking in training ahead of a game against Canada and was ruled out for the remainder of the tournament. His back-up, Colin Slade sustained an injury against Argentina, so Aaron Cruden, who had also been omitted from the original squad, started against France in the final. Donald wore the number 21 jersey.

He recalled: “Physically I wasn’t as well prepared as I might have been. Mentally I was fine, I was pretty fresh.” Cruden was injured after 33 minutes in a tackle with Francois Trinh-Duc. Donald was told to get warm quickly. He looked slightly incongruous squeezed into a jersey manufactured for the much smaller Cruden.

He resumed: “To be fair I was pretty confident, I craved to be out there.” On 44 minutes with New Zealand leading 5-0, the All Blacks got a penalty and Donald grabbed the ball straight away. “Now it has a fair bit more significance but at the time it was just a kick with about 25 (minutes) or 30 to go that needed to go over. There wasn’t too much going through my head to be fair.”

Donald landed the 32-metre penalty from in front of the posts, squeezing inside the right hand upright and despite France managing to respond with a converted try from Thierry Dusautoir, the All Blacks held on for victory.

“It was pretty sickening at times in terms of how the gut was feeling. When you look back at it now, you’re pretty proud of it, because the boys fronted up for that whole second half, tackle after tackle. People probably thought we had to break at some stage but we held tough.

“Those scenes after the game are something that you will never forget. To see everyone stay at the ground for what seemed like an hour after the final whistle was pretty special, something that no one will ever forget that was a part of it.”

Donald went on to play in Japan and for Bath in the English Premiership and earlier this year as a 35-year-old, answered an injury crisis to join the Chiefs squad in the Super Rugby Championship. Leave it to Beaver indeed.