Refocused England will be formidable opponents, especially at Twickenham

In many ways they have been a benchmark for us 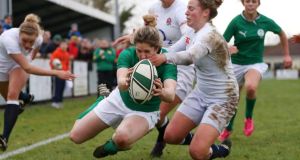 Saturday will be our second time playing at Twickenham. Ten years ago we were the undercard so now we are the main event, right? But seriously so much has changed.

Despite losing 55-10 in 2004, coming off the pitch we were pleased with our trademark rolling maul tries from Joy Neville and Rachel Boyd.

The feeling didn’t last long as we were hurried not only out of the dressing room but the stadium. We could hear the crowd across the road as we huddled around a television in the RFU offices.

The English girls hadn’t been shooed off the premises but in a show of solidarity they joined us. Such happenings were the norm back then. We dealt with all of them with our usual good humour.

Things are different now but it took an awfully long time. Point is we understand better than most that respect has to be earned. Especially from the England women’s rugby team.

Until last season our history against them made for grim reading. They are by far the best funded and organised women’s union in the world. Giving credit where it’s due, they had an admirable development pathway in place years before any other nation. In many ways they have been a benchmark for us.

My first cap was against England in 2001. We lost 79-0. The plan back then was damage limitation. The scrum walked backwards from the put-in, our scrumhalves didn’t know what ‘passing from the base’ meant and wing was an awfully lonely place.

It wasn’t until 2008 at Sunbury that we had had enough. That’s when our entire belief system changed. They were chasing a third successive Grand Slam yet with three minutes to go we trailed 10-7 as they threw everything at us. But we kept blasting them backwards.

We fell into a trance that day. There is no other way to describe it. All we wanted was English blood! I love telling people about that match although I can’t really remember it. I have vague images of flinging myself at every white jersey that came down my channel and leaping back to my feet to do it over and over again.

Becomes automatic
Defending in rugby is 90 per cent attitude. Technique is important but with enough practice it becomes automatic, but a genuinely punishing hit requires real conviction. When that happens there you hear it in contact and see it in your team-mates eyes.

England eventually won 17-7 due to a late try, down to fatigue more than anything, but a seed of doubt had been planted in their minds. Afterwards we were distraught while they looked relieved. When the pain of the defeat subsided the feeling of what might have been made them beatable.

It isn’t hard to reach the essential emotional pitch for England. I firmly believe that’s in part due to our history. Irish history, I mean (a GAA background can only help!).

But it’s a scary situation to find yourself in, particularly for the younger girls, as bigger and technically superior players charge towards them. You must abandon any care for your own welfare. I don’t want to take that feeling for granted. But I know it is in us and we have constructed strong armour around that foundation.

Specific strategy
In the last three years Ireland have developed and changed immeasurably as a result of specific strategic and technical input, specifically from Steve Aboud (IRFU head of technical direction).

We will never be the biggest team but there is no reason why we can’t be the smartest.

Steve, in tandem with our own coaches, changed our understanding of how to exploit space, specifically in attack. When a group understands they are equally involved in making an attacking or defensive system successful it breeds incredible cohesion as everyone knows they can rely on the people around them.

That’s not to say we haven’t got the brute strength in our artillery. Woe betide the meek or scrawny defender that gets caught on Jenny Murphy or Sophie Spence’s war path.

I love seeing the confusion on a defender’s face when they think they have lured feisty openside Claire Molly or Alison Miller into their trap with a secure tackle only for someone to scamper past into the vacant space behind them.

Weapons like these coupled with an improved understanding of our play, married with a burning and deeply in-built drive to fight and beat England, should have us ready for Saturday.

The obvious problem is we beat them 25-0 last year. Yes, there were extenuating circumstances as six of their backs were on Sevens duty but their entire pack was in front of us. England has an incredible strength in depth. They have over 50 fully paid staff on their books. In 2010 they lost the World Cup final to New Zealand, the same as 2006, so no progress at the top of the tree.

Last year they focused on the Moscow World Cup Sevens only to bomb out, finishing sixth, so this season the emphasis has returned to the Six Nations and 15-a-side World Cup.

There is a backlash coming, especially after their full metal jacket was pierced by France, another really good side, in their opening game.

Imagine poor little David had to fight Goliath all over again a year later? We know we are going to need more than a slingshot to topple England.