Kane Douglas back in the mix for Australia against New Zealand 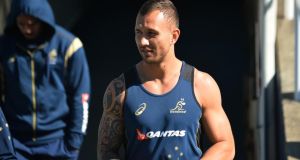 Australia coach Michael Cheika has insisted there is method in the madness of selecting Quade Cooper as his starting outhalf at the All Blacks’ fortress where the playmaker’s career was nearly derailed.

Cheika sprung a surprise on Thursday with six changes to the Wallabies side that inflicted a rare and emphatic defeat of the All Blacks in Sydney last week.

But it was New Zealand-born Cooper’s reinstatement that caused the biggest waves on social media.

Branded “Public Enemy Number One” during the 2011 World Cup in New Zealand as part of a media-driven campaign to upset the outhalf, Cooper was jeered relentlessly throughout the country in every match he played.

He appeared shell-shocked at Eden Park in the semi-final demolition by the All Blacks, enduring a poor game to the delight of the sell-out crowd.

Days later, he suffered a sickening knee injury in the bronze medal playoff against Wales at the same ground.

Cooper has struggled against the All Blacks since and last month revealed his sensitivity to criticism from New Zealand media when he posted an expletive-filled rant on Twitter in response to some negative reporting.

With Australia holding a genuine chance of winning the Bledisloe Cup, the annual trophy contested between the nations, the selection has been seen as both a huge vote of confidence and a potentially calamitous gamble for both player and team.

Cooper was underwhelming in the Rugby Championship matches against South Africa and Argentina and left out of the matchday 23 for the Sydney win over the All Blacks.

Many felt utility back Matt Toomua had a greater claim to replace Bernard Foley in the number 10 shirt after his bright cameo off the bench in Sydney. Toomua will instead start at inside centre.

“I believe in (Cooper) ... as a person and as a player,” Cheika told reporters at Sydney airport.

“From before we played the first game I thought I’d have a look at doing one thing in Sydney and (another) thing in Auckland.

“Just because we won in Sydney, I didn’t want to change my approach ... I just wanted to have a look at that combination of (Cooper) and Toomua playing together.

“The game changes every week. I think if we just stay the same all the time, we’ll become real easy to pick, perhaps.”

Cheika has certainly kept his opponents guessing by changing his key combinations week by week in the Wallabies’ perfect 3-0 start to the season.

The coach has also won praise for turning the bench into a potent weapon five weeks out from the World Cup, with the reserves ensuring the team has finished full of running.

Cooper will nonetheless face the ultimate test of nerves in the pressure-cooker of Eden Park, where a frosty reception can be guaranteed for a player branded a “cheap shot-artist” in New Zealand for a couple of on-field clashes with All Blacks skipper Richie McCaw many years ago.

Cheika’s gamble will no doubt be hailed a masterstroke if Cooper puts in a half-decent game and the Wallabies clinch their first win over the hosts at Eden Park in 29 years.

A crushing loss will be a bad blow for the Wallabies’ confidence ahead of the World Cup, however, and ensure the ghosts of Eden Park haunt the outhalf for at least another year.