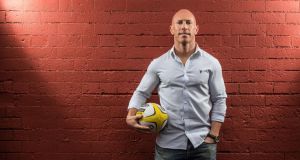 Peter Stringer has 98 Ireland caps and has not given up hope of adding to that number. First up, though, is to find a new club, with Leinster among the sides rumoured to be interested in his services. Photograph: Cathal Noonan/Inpho

The trick to getting older is not to get old before time. It’s an aphorism to which Peter Stringer would subscribe. Rugby’s Dorian Gray celebrated his 37th birthday in December, an age that might be considered unremarkable for a prop or secondrow, but there aren’t too many scrumhalves of that vintage playing in the English Premiership.

When Bath recently told him that they would not be offering him a new deal when his contract expired at the end of the season, there might have been an expectation abroad of an impending retirement announcement, but he was quick to scotch the notion.

He refuses to kowtow to other people’s opinion, retaining a passion for the sport and a belief that he still has something to offer. A Grand Slam, four Triple Crowns, two Heineken Cups; there’s nothing for him to prove other than what he must prove to himself.

He maintains that it is not just blind obduracy on his part. “I have the measurements of my goals. I don’t see that it has changed over the years. I’m still top two or top three fitness-wise in the squad.

“The accuracy of my game is still there, passing, kicking; I’m still able to adapt and I am still learning new things about the game, which is exciting. I don’t want to base me finishing on some coach’s [preference], one single person’s decision not to pick me.

“It’s always the dilemma of age. I genuinely do not feel that is a factor. When you feel wanted, when you feel you can add value to something, it’s a huge motivating factor to keep going, knowing that you can contribute.”

Blessing of his fiancée

Stringer chuckles when asked to address media conjecture about a move to Leinster, one that enjoyed a little traction when the subject was broached directly by Matt O’Connor in answering a specific inquiry. “Leinster blew up in the media and that was the first I heard of it. Whether it’s an option, I have no idea.”

He elaborates by saying he doesn’t want to know who has come courting his services next season unless it’s substantiated by a concrete proposal. He admitted: “My agent has been really coy with me. He said: ‘Look, I’m talking to three clubs. I am not telling who they are until it comes to a stage when you need to make a decision. One of them may be 50/50. It may not happen, you may get your hopes up and then you might feel like you are settling for something else.’”

Retirement was never on the agenda. “It never, every crossed my mind. People around me, thinking of my best interests, they were suggesting I should, which was a bit disheartening. The challenge for me was that after being in Munster for so many years – was to back my own ability by being prepared to move away.

“I had never seen myself moving away from Munster, never envisaged it. I always saw myself playing for Munster, finishing there and having the final farewell as everyone dreams of. As it turns out, it didn’t work out. I didn’t want to finish my career based on a certain decision that a coach didn’t want to pick me. I still felt really good.

“In my own head I couldn’t come up with a reason why I should stop playing; still felt I had a lot to offer, knew I did, given an opportunity. I felt that I didn’t get that really in the last couple of years with Munster.

“It never came into my head, even though a few external sources hinted at wanting me to go out on a bit of a high at home. They might have believed that moving away wasn’t the right thing and that the challenge . . . I wasn’t up to it. I have too much of a passion and a love for the game to let it dwindle away.

“That last season [with Munster], I didn’t have an opportunity to start and I wasn’t even on the bench. It was just not what I was about. I was doing all the training, even more training when you are not playing games.

“You try to contribute to the team environment with their preparations for the weekend but you don’t get the opportunity to play. You are doing your extra work on the Sunday because you didn’t get a chance to play on the Saturday and you’re in again on Monday. I got into a bit of a cycle for a month or so. I thought, I can offer more than this.”

“There are guys who you get on very well with and sometimes it would be quite awkward because they’d be trying to avoid the subject, say after a team announcement on a Tuesday. Then there would be the few guys that you would be really close to and you would have those conversations with them; you’d deal with it.

“You would find solace in that there would be other guys in a similar position and you’d have bitching conversations in which frustrations were vented. There are different levels in which you would interact.

“There are guys on the fringes who are happy with that, happy to be in the squad environment but I got to the stage where I was in the worst place in the world mentally, thinking ‘this isn’t for me’. You do need a squad. I was happy to contribute to the preparations as much as the next guy but I wanted to be out there as well.”

A couple of loan spells at Saracens (December 2011) and Newcastle Falcons (February 2012) precipitated the cutting of the umbilical cord at Munster when Bath offered him a short-term contract in January 2013 to replace the injured Michael Claassens. In April it was upgraded to a one-year contract and, in March 2014, he signed on for another season.

“This year at Bath they have me trying to mentor those younger guys. There is that difficulty because I still want to be playing, I want their position. Why should I be telling them [what to do]? There is that conflict in my head.”

He’s not sure whether he’ll make the match squad for next weekend’s Champions Cup quarter-final against Leinster at the Aviva stadium, admitting: “That is a conversation I’ll be having with the coach [Mike Ford] in stating my case.

“All season we have gone well apart from the last month or so when the lads have gone away to England. It’s the same for Leinster.”

Last Saturday Stringer sat in a hotel bar, braving the wrath of some disgruntled locals by persuading them to put on the rugby. Like everyone else he marvelled at the numerous twists and turns in the narrative of the day, delighting in the final outcome.

He won the last of his 98 caps for Ireland against England on March 11th, 2011. He is still prepared to dream the dream. “For as long as I am playing, that will always be there. I meet people and they say to me ‘when did you retire from international rugby?’ I respond ‘I haven’t really retired, it’s involuntary retirement really.

“As soon as you give up on something, that’s the start of the demise. In my own head, why would I do that? I still want to play and the dream is always to play for your country. That hasn’t gone. Until the day I finish playing that will always be my ambition.”