France secondrow claims the suspension ‘was excessive and disproportionate’ 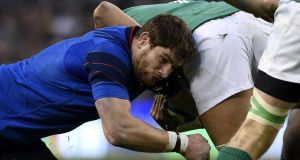 France lock Pascal Pape has appealed against his 10-week ban for kneeing Ireland’s Jamie Heaslip in the back. Photograph: Franck Fife/AFP/Getty Images

France lock Pascal Pape has appealed against his 10-week ban for kneeing Ireland’s Jamie Heaslip in the back, claiming the suspension “was excessive and disproportionate”.

An appeal hearing will be held in London next week, Six Nations bosses have confirmed.

Stade Francais secondrow Pape will have played his last Six Nations match unless his ban is reduced, but the veteran will extend his Test career to the autumn Rugby World Cup.

Pape was sin-binned by referee Wayne Barnes for his crude challenge on Heaslip in France’s 18-11 defeat to Ireland in Dublin, but was later cited for the incident.

“Pascal Pape, the France lock forward, has appealed in respect of the sanction imposed by an independent Six Nations disciplinary committee, which found that he had committed an act of foul play, an intentional strike with the knee, in the RBS 6 Nations match between Ireland and France on 14th February 2015,” read a Six Nations statement.

“The appeal is on the grounds that the 10-week suspension was excessive and disproportionate.

“The hearing for Pascal Pape, before an independent Six Nations Appeal Committee, will be held in London next week.”

The former Bourgoin and Castres enforcer was found to have committed the act deliberately by a Six Nations disciplinary hearing, who limited his ban to 10 weeks after he admitted remorse.

Pape apologised to Heaslip on Twitter, with the Leinster star fully accepting the message, ahead of the initial disciplinary proceedings.

Heaslip accepted Pape’s apology, by tweeting: “pascalpape thanks for your message. It’s a physical game that we play and these things happen. I fully accept your apology”.

France star Pape had claimed his actions were unintentional, but that did not find any merit with Six Nations bosses.

France coach Philippe Saint-Andre had claimed the challenge was an accident, but Heaslip was left with three broken vertebrae in his back.

France edged out Scotland 15-8 in their opening Six Nations match before slipping to defeat in Dublin.

Les Bleus host Wales in Paris on Saturday in a bid to revitalise their Six Nations challenge.