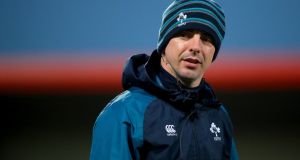 Ireland Under-20 coach Noel McNamara:. “The boys are aware of the opportunity that’s there. That’s come about by backing themselves. and doing all the right things in the previous rounds.” Photograph: Oisin Keniry/Inpho

Two years ago Noel McNamara, the then Ireland Under-18 coach, spoke to his players in a post-match huddle after they had beaten Wales, coming from 17 points down at half-time to win by two in Caerphilly. He told them they were good enough to go on and win an Under-20 Grand Slam.

That moment of prescience must withstand one final examination in Colwyn Bay, Wales, as Ireland the Under-20 Six Nations champions with four victories from as many matches bid to emulate Eric Elwood’s 2007 Grand Slam winning team, two of which, Keith Earls and Cian Healy, will be in action at the Principality stadium on Saturday afternoon.

McNamara smiled: “I said on the pitch at the end of the game, ‘boys, you will win an Under-20 Six Nations’ and in fairness to them, they backed it up. That could have gone either way! I mentioned it to them at the start of the year actually, and the only who remembered was Liam Turner. There is also not a huge turnover from that team. A lot of the guys that were involved at U-18s into U-19s have come through as U-20s.”

He spoke about the camaraderie within the group, organic grown rather than force-fed, and how much of the campaign has been player-led.

There has also been no embargo on mentioning the phrase “Grand Slam”. McNamara explained: “The thing for us was, we weren’t afraid of it. It was never a banned word. It was never something that wasn’t spoken about.

Ireland are boosted by the return of outhalf Harry Byrne – Ben Healy had a fine game against France – following a hip flexor issue, and that their totemic scrumhalf Craig Casey has managed to shake off injury too.

Wales have made seven changes and a number of positional switches to the side that lost to Scotland, but are without arguably their best player in Dragons’ backrow Taine Basham. The side does contain a couple of famous names in Cai Evans, son of Lions and Wales wing Ieuan, and Teddy Williams, whose father Owain played number eight for Wales.

The home side beat England at Friday night’s venue earlier in the campaign, something an Ireland team has never managed in north Wales. It’s one more box to tick.

McNamara said: “The boys are aware of the opportunity that’s there. That’s come about by backing themselves and doing all the right things in the previous rounds. We’ve never won in Colwyn Bay actually as an U-20s team.

“The one thing I will say about this group is they’re motivated by challenge. They’re certainly not diminished by it. It’s something we’ve already spoken about, is that record. Equally, I think if you look at something that’s never been done, you look at it another way. What an opportunity.

“History is watching, and an opportunity for them to write another little chapter, and I suppose set the bar a little bit higher for next year’s team. That’s certainly something that they’ve worked really hard at doing up to this point. I’ve absolutely no doubt they will again on Friday.

“The measure of this group isn’t whether we win a Six Nations or win a Grand Slam. The assessment of the group will be in 10 years. This is a development team, and its [remit is] two-fold; we want to be competitive and learn to win, but, equally, we have a responsibility to develop these players and develop them as people so they can go on and have really good careers in the provinces and the senior Irish team.”

The Irish management and players have stayed true to the principles of play they agreed at the start of the tournament ,and it has been hugely entertaining to watch. They have shown courage as well as talent in adversity, and will need both to take that final step, something well within the compass of this group.