O’Driscoll to lead Irish dominated side in Perth 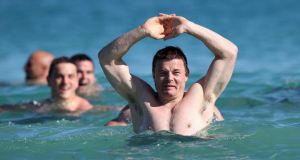 Brian O’Driscoll takes part in a recovery session at City Beach in Perth. The Irishman will captain the Lions against Western Force on Wednesday. Photograph: David Davies/PA

As expected, Brian O’Driscoll will lead a side containing another seven fellow Irishmen as Warren Gatland unveiled an entirely refreshed starting XV for the Lions’ second tour game, and first in Australia, against the Western Force in Subiaco Oval, Perth on Wednesday (kick-off 6pm local time, 11am Irish).

Returning to the ground where he made his Lions debut a dozen years ago, and where Graham Henry curiously employed him at fullback, O’Driscoll will be accompanied by Tommy Bowe, Rory Best and Seán O’Brien – the latter duo making their Lions debuts – as well as Jonny Sexton, Conor Murray, Cian Healy and Jamie Heaslip, all of whom played as replacements in Hong Kong last Saturday.

There are four Welshmen and three English in the starting team, with a further half-dozen English players, one Welsh and one Scot on the bench.

However, it also emerged that Rob Kearney’s tour is hanging in the balance after a scan revealed that the tightness he suffered in the warm-up to the Rabo Pro12 final is actually a grade one tear.

Thus, whereas tour skipper Sam Warburton and Gethin Jenkins are expected to play against the Queensland Reds on Saturday, Kearney has already been ruled out.

“Rob Kearney is a little bit of a concern for us at the moment to be honest,” admitted Gatland. “He’s got a grade one tear and we’re going to see how he responds, so we’ve got to be potentially prepared that that hamstring might not heal as quickly as we would like. We’ve got to put some other potential plans in place for that.”

The coach said that Kearney would have “markers”, rather than deadlines, though presumably he would need to be playing by Saturday week against the Waratahs, which ought to be within his compass. But as Gatland also conceded, the time afforded Kearney would be complicated if there were any other minor injuries amongst the outside backs.

O’Driscoll has been named at 13, outside Manu Tuilagi (who along with Dan Cole and Ian Evans, are the other Lions debutants in the starting line-up), and recalling his Lions debut a dozen years ago, O’Driscoll said: “It was a fantastic feeling. I was a young guy just starting out on my career. It was all very new to me. I suppose I was just trying to go with the flow and feel my way into things and pulling on the jersey for the first time was a very, very special moment and something I’ll always remember.

“But it’s one thing pulling the jersey on, it’s another thing winning with the Lions and that’s the mentality we’ve got across the squad, but those guys that have been there before, no-one has won a Test series. We’ve got to continue trying to build on that mentality of, as I mentioned, being ruthless and making ourselves very difficult to beat. That started last weekend and that’ll carry out throughout the course of this tour.”

Looking ahead to Wednesday’s game and the relative strength or otherwise of the Western Force, Gatland said: “I think at this stage it’s not worrying about the opposition, it’s just about building on ourselves. We’re not looking too much at the Australian sides at the moment. We’ll start to do that a little bit later.

“It’s just about reviewing our own performances and improving on those. We’re still getting to know calls and patterns structures, and building combinations as well.

“As Saturday was, this game on Wednesday is about us. We’ve had a little bit of a look at the Force and the way they’ve been playing. We’ve got a gameplan to go out and attack them, we won’t be looking at them in too much detail. As I said it’s about us and our preparations at this stage.”

Gatland is looking for his team to build upon the beating they gave the Baabaas last Saturday. “There were a lot of positives to come out of the first match in Hong Kong. Our fitness and application were excellent and we operated well in the set pieces. That said, it was our first match and naturally we were a bit rusty, and there is definitely room for improvement.

“Of course this a completely new team and the challenge is to ensure that the selected players continue the on-field progress we are seeking. With Brian at the helm you can be sure they will be ready to emulate the victory against the Barbarians. This is his fourth Lions tour and he is a respected leader.”