Penalty after 76 minutes sees off England in Ashbourne 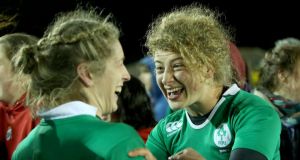 There they were; Ireland and the recently crowned world champions all square at 8-8 with 25 minutes remaining to essentially define both teams Six Nations campaign.

The vicious, unpredictable wind took kicking of any kind out of the equation. England thundered into Ireland’s 22. They were met by Claire Molloy’s driving shoulder and a textbook Briggs turnover.

They kept coming but the scramble defence held firm. Nora Stapleton eventually booted ball into English territory. Suddenly the tables were turned. Similar situation as against France a fortnight ago, only this time just three points were needed for victory.

The revelation, and by dint evolution, within this Ireland squad has been two fold; the generalship of scrumhalf Larissa Muldoon and enormous work rate of Sophie Spence.

Spence is the cornerstone of Ireland phase play now. It is the English-born lock’s carrying that got Ireland over the gainline time and time again. It’s her improved strength, leg drive and sheer guts that kept delivering.

That gave Ireland a winning platform, what gave it back to England was the homework done on Mas Reilly’s lineout. It would be easy to blame hooker Gillian Bourke’s throwing but on closer examination it looked like the English lifters were getting their jumpers up in front of Reilly.

As a result, too much vital possession deep in English territory was surrendered. Reilly fixed the lineout problems for the crucial last assault when the maul finally yielded enough yardage to get into the scoring zone.

It started ominously. England, mainly through the vision of captain and outhalf Katy Mclean, engineered the first few scoring opportunities. Despite the swirling wind Mclean sought to build a lead at every opportunity. She missed two penalties but landed one on 12 minutes when Alexandra Matthews burst clear. Briggs appeared to legally tackle and stop Matthews with a chest high collision but referee Leah Berard disagreed, 3-0 England.

Briggs did level it with her first shot at goal, after more grunt work by Spence, but England reverted to type.

They upped the tempo, scrumhalf Bianca Blackburn probing at every opportunity, to bring matters close to Ireland’s try line. Jenny Murphy made a fine tackle on Abigail Brown but the English scrum was not to be denied.

On the stroke of half-time, as the Irish eight fractured, number eight Harriet Millar-Mills patiently walked the ball over the whitewash. Mclean was unable to convert but 8-3 was a sizeable lead in the conditions.

Handling errors continue to hurt Ireland. Third game into the Six Nations and they were still struggling to go through the phrases out wide, and away from England’s bigger pack, when a period of unforced errors was needed.

But in typical fashion they opened the second half with a burst of energy. Heather O’Brien, Spence, Fitzpatrick, Molloy and Egan all carried with relish. Just when it felt like this period of dominance would fail to deliver points, Muldoon took a quick tap and dashed over.

Briggs was forced to rush her conversion, after it fell off the tee, and lashed it wide. Ireland’s new captain had hurt her calf. It didn’t stop her taking the late penalty. Usual routine. Usual result.

England were afforded four more minutes of injury time and like true champions threw everything at the thin green line. They were met by Spence and Egan – both injured in this last heroic resistance – new leaders in this evolving Ireland side.

Replacements: A Reed for H Gallagher, H Field for L Cattell (both 75 mins), F Davidson for B Blackburn (79 mins).