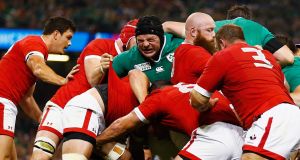 Like John Hayes for over a decade before him, so it has been with Mike Ross for the last half a decade. And like Hayes, even at 36, this Six Nations’ campaign has underlined Ireland’s utter dependence upon Ross.

It’s been like this since the very advent of the Six Nations.

Here’s a startling statistic to highlight their importance. Until this season, Hayes and Ross had been the only two Ireland players to wear the number three jersey in the Six Nations for 16 years – an astonishing 79 matches – in succession.

Since Hayes made his debut in the second game of the 2000 Six Nations at home to Scotland, he started every one of Ireland’s matches for 11 campaigns – that’s 54 matches in a row. Whereupon Ross was handed his Six Nations debut against Italy on the opening weekend of the 2011 tournament and until this season had played five full campaigns, 25 matches, in a row. There’s been no duopoly in one position like it in the last 16 seasons.

For much of his career, we always wondered and feared what might happen if Hayes was ever injured, and if not to the same extent, it’s been the same case with Ross. Thankfully, Hayes remained indestructible, and so too until this season, had Ross.

But then we found out. With Ross hamstrung, and his understudy for the last two seasons Marty Moore also hors de combat, the Ireland scrum struggled in the opening two games against Wales and France, leading to the concession of each try in that game which effectively cost Ireland two wins.

Against England, Ross was restored to fulfil his basic duty of locking the Ireland scrum for the hour he was on the pitch, and chipped in with nine tackles and an offload, albeit he admits to finding the going tough.

Ross tends to need match sharpening more than most and to that end was afforded a third half-game with Leinster following his return to action in last week’s win at home to the Ospreys, no doubt to keep him ticking over as a prelude to starting against Italy.

Looking ahead to renewing hostilities with the Italians, Ross says: “They have a good pack. You know that Italy is going to be a street fight. It is probably one of the toughest games you will face as a forward because they will attack you there all day long. You have to be on top of your game to keep them out.”

“They have a good maul. You saw that against France. They have a decent scrum. They will probably be hurting there because Scotland got a few penalties out of them there. They will be looking to redress that.”

The Azzurri scrum differently from other packs, according to Ross, in that “they don’t tend to hook the ball. There is only one thing they can do which his walk over it. That means they have to go forward. This is putting a lot of pressure on themselves to go forward and it is a challenge for us to stop them doing that. You might see the ball sitting there for 15 to 20 seconds.”

“If it’s your put-in and you’re not hooking, the pressure is on you.

“It is up to us to make sure we keep that pressure on and we don’t relax because if they get go-forward it is very hard to stop them. It can be a real weapon for them.”

The infusion of new blood can have a galvanising effect on established players and even a grizzled and gnarled veteran like Ross was not immune to the ripple effects of three players making their debuts in Twickenham.

“ You want them to have positive memories of that first cap and unfortunately it wasn’t to be for them against England. For those guys, they should have another chance against Italy.”

If it was unusual for us to witness an Ireland team without Ross, it was even odder for him. Not only had he been an ever-present for five seasons in this tournament, but until this Six Nations he had started in 25 of Joe Schmidt’s first 27 matches in charge.

“For one of them I did a player appearance for Sony and went back and watched it at home,” Ross says. “The other one, my wife scheduled my son’s birthday party for the same time. I don’t know what she expected to happen but I kind of ended up on my phone watching the game and being of no help whatsoever but I’d had a few dads around me so it was not so bad.”