Michael Cheika ready to go his own way with Australia 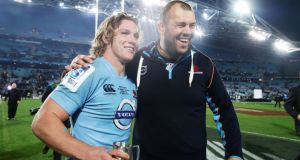 The 22-year-old captain, Michael Hooper is one of a number of Australia players coached by Cheika at club level. Photograph: Matt King/Getty Images

“ Yes,” he says “the team did really well. We took our chances and got the points. No injury concerns, we’re in good shape. Very happy.”

He smiles and thanks all. But there is a window open into the changing room where he is addressing the players. Cheika is in full flow, his Australian accent cutting the air with profanities and, as it was described, “handing the Leinster team their arses on a plate.”

Cheika, who has in principle accepted the job of Australian coach, and who is now likely to lead a Wallaby team to Lansdowne Road to face Ireland on November 22nd, has never been accused of waffling or being touchy feely.

His strength as a coach with Leinster and latterly NSW Waratahs has been an ability to put structure on a squad, invite players to buy into the culture and intensely pursue his goal.

When he arrived to the RDS in 2005, Leinster chief executive Mick Dawson called it a calculated punt. That may well be how the Australian Rugby Union (ARU) see things now as they scramble for unity and order with a team leaving for a summer tour on Friday after former coach, Ewen McKenzie, walked last week.

“It’s a pretty humbling experience to be asked to be involved in something like that, but we’ll see what happens,” Cheika told the Sydney Morning Herald. He has still a year to run on his Waraths contract.

“There are a few things to be ironed out, obviously the logistics, etc . . . everything is so close.”

Cheika is in a strong position. At such short notice there will be little immediate expectation in Europe and on his side he has vast experience.

The 47-year-old has already made millions in business and won’t be distracted by the salary. As one of the most sought after coaches, who has now won rugby championships in both hemispheres, he doesn’t need the job to enhance his reputation.

He sees it as an honour but Cheika won’t take on a team that is structurally set up to fail and that’s how some people see the current Australian system.

He can also come in at a distance to the Kurtley Beale texting scandal. Beale faces a conduct hearing this week for sending lewd images relating to former team business manager Di Patston, who is disputing allegations she had a relationship with McKenzie.

The ARU, accused of bungling the issue, backed Patston, not their star player.

But the 22-year-old Australian captain, Michael Hooper is one of a number of Waratah players involved, which instantly gives Cheika close proximity to a rump of the squad. They, like the Leinster players, know what to expect.

“He understood the players in his squad. He wanted things done a certain way and everyone understood it. He’d monitor the training sessions and if he didn’t like what he’s seeing, he’d give you both barrels, roast you for it.

“He wanted a certain environment, how to do certain things and he created that really, really well. The players were sure of what he wanted and that I think led to confidence and clarity.”

Cheika will arrive with a deep knowledge of Irish players, Jamie Heaslip, Rob Kearney and Gordon D’Arcy all former pupils.

“He’d have an insight into the mindset of fellas,” says Fogarty. “But I think now days there is so much analysis going on that everyone has a really good read on oppositions and individual players. I don’t think it will be a huge factor.”

It’s a sulphurous environment to step into but if Cheika is good at anything it’s drawing clear lines.

The formal announcement is expected today.