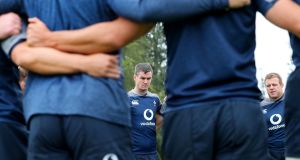 Pivotal Irish halfback duo Johnny Sexton and Conor Murray are back together to face Wales on Saturday. Joe Schmidt’s final match as Ireland coach at the Aviva stadium will also see the timely return of Keith Earls and Robbie Henshaw to the green jersey before the squad departs for the World Cup in Japan.

“They are all raring to go,” said incoming head coach Andy Farrell. “Keith Earls hit his highest speed score today in training as he was going to score a try in the corner which delighted us all.”

Bundee Aki starts his third warm-up game at 12 with Henshaw wearing 13. Garry Ringrose is on the bench.

Rory Best leads a front five that includes Jean Kleyn and Cian Healy, who has shaken off an ankle injury, with a new look backrow including Jack Conan at number eight, Josh van der Flier on the openside flank and CJ Stander at blindside.

Besides Joey Carbery – who remains on track to be selected against Scotland in September 22nd – there are no new injuries in the camp.

“We are in a bubble here,” said Farrell “The squad has been picked, the wait is over, that has brought us closer together. You are already seeing ownership in different group and different silos within the game. Because of that the cohesiveness throughout the group is one of a much higher standard.”

Best, whose 120th cap will be his last in Dublin, was asked about the flack he took following the 57-15 defeat to England at Twickenham,

“The biggest disappointment was in the team room in Carton House. We’ll see this Saturday and into the World Cup if we can take ownership of that,” said Best

And what about the end of a great international career?

“It’s not something I’ve given a lot of thought about until I walked off the pitch today. There is always a few of the same faces that greet us off the pitch. One woman in particular was in tears saying this was the last time I’ll walk off the Carton pitch.

“It’s important that doesn’t affect our preparation. It’ll be a really big occasion when I look back on it. But it’s about us taking a massive step forward before we get on a flight to Japan on Wednesday.”