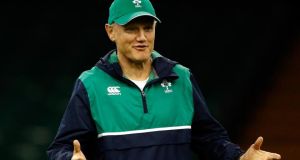 To heap the nation’s hopes and dreams at at feet of Ireland coach Joe Schmidt is wrong. Photograph: Stu Forster/Getty Images

‘A tournament match (or tie or fixture ) may involve multiple game-matches (or rubbers or legs) between competitors.”

The origins of the word ‘tournament’ come from the French word ‘tournoi’. A lose translation is ‘a series of matches’. The word ‘tournoi’ was used when knights, clad in protective metal, galloped on trusted steeds, holding a ‘bloody great’ sharpened pole and tried to ‘poleaxe’ the opposing jockey in a joust.

The trick of winning the joust was to unseat the other poor bastard, sending him, feet first, out of the ‘tournoi’.

It did not matter if the knight ‘lucked out’ with a pathetic shot that somehow clipped the opposition rider so that he lost balance and gently slid to the turf. Or if a brilliant lance skewered ‘Sir Lunch-a-lot’ like a fork into a sausage on the BBQ. The victories were of equal value.

International rugby is not used to tournaments with weekly matches for seven weeks. Performing at a high level for the entire RWC is almost impossible. There are no extra points for winning by 60 points or by one. The key is to simply win. In the pool stages in 1991, Australia scraped home against Samoa 9-3. The Wallabies then scored in the last seconds to win 19-18 against Ireland in the quarter-final. Can we ever forget? Two games in a row, both less than convincing.

Australia then smashed New Zealand in the semis and grabbed the William Webb Ellis Trophy after England inexplicably decided they were not the boring, grinding team that had mauled their way to the final, but rather a nation born into running rugby. England made a complete hash of the final and handed Australia their first World Cup trophy.

The Wallabies rode their luck. Do not be fooled – winners need luck. In tournaments, survival is the key. In all but two of the RWC tournaments, New Zealand have crushed teams by 50+ scores game after pool games, only to mentally crumble in a crunch match. Winning by a huge margin against Canada and Romania is not mandatory for success in the tournament.

Ireland defeated Australia in the pool stages of 2011, then dropped out in the quarters. Australia made the semis. France lost to Tonga yet made the final.

Like every team with a real chance of winning the World Cup, the Irish team, as a group of men, simply need to build their onfield cohesion and, even more importantly, be mentally tough and resilient.

Like any joust, Ireland are going to take some hits. As the old boxing saying goes, “Everyone has a plan, until they are punched”. In a World Cup where there is nothing between New Zealand, England, Australia, South Africa and Ireland, the punch is inevitable.

I have to warn you all, the ride for the Irish supporters will be edge-of-your-seat stuff. At present Ireland’s attack is not functioning to produce a lot of tries. Regular readers will know I have been talking about this since the last Six Nations. Recent matches have only confirmed the fact that Ireland are struggling to break down opposition defences.

This is a massive issue for Ireland if they are to move deeper into the tournament. The return of Seán O’Brien and the selection of Iain Henderson will provide much needed, close-running ball-carrying. Cian Healy needs to be added to the mix.

The real problem lies in the lack of penetration in the Irish midfield. The Irish attack is blunt.

I am a Luke Fitzgerald fan. He is a real gentleman. I am delighted to see him at the World Cup and overcoming such great odds after suffering a series of morale-sapping injuries. His resilience and determination are highly admirable and have been rewarded. The difficulty for Luke is he is being selected in a different position almost weekly. The move from outside to inside centre seems minimal to the punters. In reality it requires a major adjustment for the player. This takes time.

Both Jared Payne and Robbie Henshaw have not developed as an attacking duo as quickly as I had hoped. Ireland need the centres to show some individual brilliance and beat the defender. Simple to say, but difficult to execute.

Because the attack is not going through the defence, Johnny Sexton is doing a lot of cross-field ‘Beckham’ kicks for his wingers to catch and score. Both Keith Earls and Dave Kearney are not the tallest wingers in the game and the returns from the kicks have been poor. I have no evidence that at the tournaments of yesteryear, as the local village knight was galloping in, intent of skewering his opponent, a punter in the crowd whispered to his son, “Don’t worry Joe Schmidt’s his coach.”

Rugby is regrettably moving into a soccer mindset, where the coach is responsible for every onfield action.

Poor Joe. I think we should all back off the ‘In Joe we trust’ mantra. Joe will not make a tackle, throw a lineout or pass a ball. It has always been and will always be the players’ responsibility to play. Joe is a great coach. To heap the nation’s hopes and dreams at his feet is wrong. If Ireland fail, and there is a chance Ireland will fail, the nation will turn on Joe. That is wrong on so many levels. Joe has done so much for Irish rugby, he deserves better treatment from Ireland, as no coach is solely responsible for a performance. To believe otherwise is ignorance.

Joe can only select the players available, equip them with the systems and tactics for that match and then send them out. Steve Hansen, Michael Cheika, Stuart Lancaster and Heyneke Meyer are all excellent coaches and will be doing exactly the same. Gatty might yet have a say as well.