Lions derailed by Brumbies in Canberra 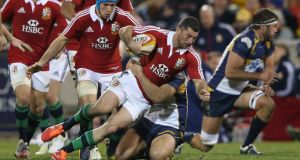 Rob Kearney of the Lions is tackled during the match against the ACT Brumbies and the British & Irish Lions at Canberra Stadium. Photograph: David Rogers/Getty Images 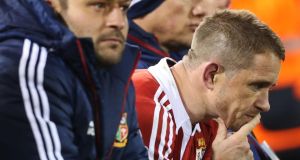 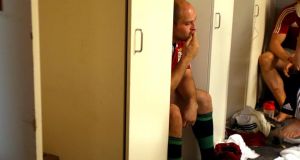 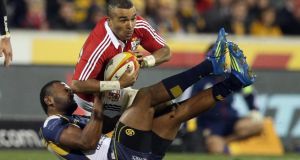 Brumbies 14 Lions 12: Warren Gatland gambled on sacrificing the Lions’ unbeaten record by picking his non-test team and a makeshift backline four days out from the start of the series, and the tourists came up just short.

For much of the first hour a hugely committed and vastly less experienced Brumbies threw themselves into tackles, none more so than a retinue of youngsters in lock Sam Carter, openside Colby Faingaa, Tevita Kuridrani and the highly promising 22-year-old uncapped prop released by the Wallabies, Scott Sio.

There were also enough touches of class from outhalf Matt Toomua and fullback Jesse Mogg to justify the hype.

Critically, they also launched into the breakdown, where the Lions struggled for their customary quick ball, while the tourists coughed up seven of their own throws.

The lack of shape in attack was illustrated by one attempted sequence of attacks off a lineout in the middle of the pitch, Ben Youngs sluggishly recycled ruck ball as the tourists went backwards, before Stuart Hoggg was compelled to turn 360 degrees, with more defenders to his outside than attackers, and run into the human brick wall that was Faingaa, primarily because all but one of the Lions were clustered together on his inside.

Stuart Hogg also hit the post twice and having been 14-3 down the Lions brought on a heavy-hitting bench which made a big impact, but with a couple of key decisions late on going against them, it was just too little too late.

Dark clouds had been the prelude to a mid-afternoon thunderstorm which thankfully abated to give way to a cold if dry and still evening in Canberra, with temperatures inching towards minus two as the night progressed. Once again, although there was a good Lions contingent, home supporters were in the majority of the 21,655 crowd, with the main battalion of forecast invasion from the Britain and Ireland clearly targeting the weekend in Brisbane.

The Brumbies don’t normally run too much from their own half, preferring a territorial game, but with the weather having relented the Jake White/Stephen Larkham/Laurie Fisher Brains Trust were clearly mindful of where the Lions’ apparent Achilles heel was located _ namely all across a decidedly patchwork, not to mention jetlagged, three-quarter line featuring four players who weren’t in Australia last weekend.

So it was, that the Brumbies were quick and eager to count-attack from inside or around half-way, and they were rewarded within five minutes of the kick-off when fullback Jesse Mogg flung a huge crossfield pass to Andrew Smith. The

Lions had numbers but Smith straightened up at Christian Wade, not the most fearsome of tacklers in truth, to beat him, draw in Stuart Hogg and offload to Tevita Kuridrani, who fended off Wade’s second attempted tackle and Rob Kearney to score.

It will not have pleased Lions’ defensive coach Andy Farrell one iota. The only consolation was that Ian Prior missed the very kickable conversion.

Rory Best, the third Irish captain of the tour, didn’t have the most distinguished of starts; the Lions only winning one of his first four throws. When he located Ian Evans in the middle with his fifth throw, it set up a rolling maul which the Brumbies collapsed, but, astonishingly, Stuart Hogg hit the upright with the 20-metre penalty slightly to the right of the posts.

Best would begin to find his jumpers, although there was a second crooked throw, but gradually the threat of Ben Youngs around the fringes faded as the Lions struggled to achieve their customary quick ball.

Instead, it was the Brumbies who stretched the home defence with the speed of their recycling and width on their game. Kuridrani was a constant menace, his hard straight line at the outside centre channel, half-break (Shane Williams doing well to haul him down) and offload creating a two-on-one which openside Colby Faingaa couldn’t convert with his pass to Henry Speight under pressure from Rob Kearney.

Mogg missed a penalty from inside halfway before extending the lead to 8-0 when Seán O’Brien was adjudged to have held onto the ball on the deck, although as is typical of a French adjudicated ruck, there were about eight bodies on the ground.

The Lions needed something with the last play of the half, and Wade made it possible by reclaiming Hogg’s restart.

This time the they kept the shape through the phases until Peter Kimlin failed to stay on his feet and Hogg closed out the half by opening the Lions’ account. However, when Best opted to go to the corner off a penalty early in the second-half, his throw to Richie Gray was picked off by Kimlin and instead, after a strong carry by Sam Carter, O’Brien was penalised for not rolling away and Mogg made it 11-3; adding another when Ryan Grant was rightly called for foul play by touchjudge Jaco Peyper for pulling Scott Sio off a maul by the neck. Good breakdown work by O’Brien, earning a penalty for not releasing against Matt Toomua and Hogg trimmed the lead. Cue Warren Gatland’s decision to bring on the bench.

A new Lions frontrow had an immediate impact at their first scrum, and even more so at the next a few minutes later, but Hogg unluckily hit the post with the 45-metre penalty.

However, when Richard Hibbard took the ball up, his counterpart as replacement hooker Josh Mann-Rea didn’t roll away and Owen Farrell, on for Hogg, landed the routine penalty.

He soon made it a two-point game after a towering 50-metre touchfinder by Kearney, but with Garces having played advantage to the Lions through one or two phases, he then pinged Conor Murray for not releasing. That was a big call, although Murray and co might have been better off deliberately knocking on to avail of a match-winning penalty.

The Brumbies appeared also to illegally twist an attacking Lions’ scrum, and the tourists last chance went when Murray gave away possession with a blind side chip and then a lineout throw didn’t go five metres.

The Brumbies picked and jammed, and sealed the ball off, to run down the clock and the home supporters celebrated an historic win. It was hard to begrudge them their victory, but important stuff awaits in four days’ time.