Learning to cope with the pressure as champions 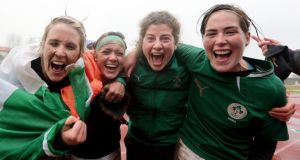 This will be my last year playing for Ireland. I’m entering campaign number 13. I like the sound of that already. That’s my number.

It’s my 12th Six Nations. I side-stepped the 2009 championship as I took a risk, heading off to New Zealand to learn from the best players in the world.

But that’s another story.

Hopefully after the last game against France down in Pau – a place we certainly know how to get to – the focus can switch immediately to the World Cup which takes place just outside Paris in August.

Not my entire focus, mind, as I’ve recently made a leap in my off field career, becoming a director of a physiotherapy clinic in Fulham.

I moved to London four years ago. There were real work opportunities and I liked the idea of joining Richmond RFC.

Both decisions have paid off.

I endeavour to keep work and rugby separate as I’m keen to earn respect in the both disciplines. Sometimes that’s tough as my mind wanders in the days after a game. Especially if we lose.

Basically, I torture myself.

In the same breath, when work gets crazy busy my rugby brain shuts down. That’s a good thing because I’m addicted to analysing games. I think I have done enough preparation over the past few months to ensure the clinic runs smoothly when I’m away on annual leave for the few days of each match week.

I don’t want to come across as a moan. I don’t ever seek sympathy. It’s a stigma the Irish women’s team hates the most. I’m an amateur sportsperson who commutes home on a regular basis, especially in spring time. So many Irish people do it. I’m just one of them. And my reward is to pull on the green jersey.

The routine building up to the Six Nations is Monday to Friday work and mostly training alone. Hop on the plane Friday evening, taxi to hotel, catch up with the girls, eat, sleep.

Systems to memorise
We were together last Saturday and Sunday in Johnstown House, Enfield. Fergal Campion is our new skills and attack coach, having replaced Greg McWilliams, so there are new systems to memorise.

My fellow ‘Exiles’ – Claire Molloy, Larissa Muldoon and Jackie Shields – get a taxi back to the airport Sunday night. I fly to Heathrow, landing just after 8pm and get home before 9pm, which is enough time to wash the training gear, do a late night grocery shop before crashing in front of the TV.

Then it starts all over again.

This week I’m squeezing five days of clients into three because at 7.30am this morning I’m travelling back into Irish camp to tunnel vision my concentration on one task. Beating Scotland.

But this week feels different.

After 78 caps for Ireland this will be our first time taking the field as Six Nations champions. At least we’re all in the same boat and I couldn’t have chosen a better crew of women. And man (not forgetting our astute and generous coach Philip Doyle).

Leigh Halfpenny said it about kicking for Wales, “Pressure is a privilege.” He’s right. Having won the Grand Slam we will have more people watching and supporting us, more media attention applauding or criticising us and higher individual and team expectations.

We must learn to deal with all of that. Every player has to figure their own way of rationalising pressure to give them the freedom to perform and I’m no different.

My way? Pressure is a privilege.

The culture within our squad has grown since 2001 as has our ability to keep coming back from so many heavy, unforgiving and physically punishing defeats.

Myself, Fi, Joy Neville and Grace Davitt all started playing within a few years of each other. I won my first cap against England in 2001. We lost of course.

Through thick and thin
We’ve been through thick and thin together so when something happens on the pitch you don’t make a conscious decision to support each other, you do it instinctively. I think the younger squad members are instantaneously embraced by that culture.

That’s one way to build a team but I am constantly open to new lessons.

But I was enraptured by the third speaker. It’s probably because I’m a Fingal Ravens girl by birth but I just love old Dubs. Now, former Dublin football manager and Dalkia chief executive Pat Gilroy is not an old man but he has that ancient way about him.

Pat spoke about the value of failure in sport with an articulate insight into bringing Dublin of 2009 – or the ‘Startled Earwigs’ as he called them after being thrashed by Kerry – to the steps of the Hogan stand two seasons later.

After that defeat to Kerry, Pat went home and wrote out the names of 11 players who would never play for Dublin again. Nine of them now have All-Ireland medals.

What he simply and honestly conveyed to a captivated audience was the importance of being open to being wrong. But most importantly, the ability to learn from these mistakes and to trust those around you.

It’s about everyone investing in the group. Yes, it’s important to have high achiever profiles but the success stories I love the most are the ones that have grown organically (as opposed to being bought in). That kind of success makes the burdens of relentless travelling and training suddenly seem light as a feather.

Freezing day
Like on that horribly wet and freezing day in Parabiago last St Patrick’s Day. We won that game more on instinct and trust than anything else.

Joy dropped into camp last Saturday. She was so instrumental in capturing the Grand Slam and is the only retirement from the core group. I miss her. Her legacy is what we should draw strength from tomorrow night against Scotland.

We all just want to get going and enjoy playing rugby again. That’s what made us so good last year. When it mattered most we trusted our systems, trusted ourselves, let go and played.

I can’t wait to line up outside Nora Stapleton and Jenny Murphy again. Can’t wait for kick-off.