Ireland coach Joe Schmidt names his team to face Wales in the Millenium Stadium ahead of the Rugby World Cup. 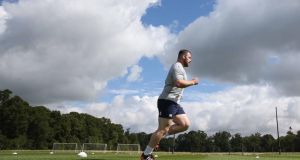 Cian Healy training at Carton House on Thursday. The Ireland loosehead will be given until the opening World Cup game against Canada to prove his fitness. Photograph: Billy Stickland/Inpho

Cian Healy will not be required to play in any of Ireland’s four warm-up matches to make Joe Schmidt’s 31-man World Cup squad.

Schmidt is comfortable giving the 27-year-old prop until the tournament opener against Canada on September 19th to recover from complications arising out of neck surgery.

“As a group, the coaches have spoken a fair bit about it. Obviously (scrum coach) Greg Feek is important in any of those decisions about the frontrow. And (forwards coach) Simon Easterby.

“We are very much working week to week with Cian. He is fully participating in some sessions. He did an individual session today so he is mixing that up. We are just hoping the picture gets clearer as we get closer so we can make a decision that would see him fully fit to start the tournament, even if he doesn’t play prior to it.

“One of the things is we play (England in Twickenham) two weeks before the first game. If we thought that he might not be fit for England but would be fit by Canada that would be part of the decision-making process.”

Other players who underwent surgery this summer – Marty Moore, Luke Fitzgerald and Seán Cronin – are all due to be fit enough to play some part against Scotland or Wales later this month.

Healy has underwent other surgeries in the past 18 months, on his ankle and hamstring, which he tore off the bone, before the neck problem flared up in May.

In the meantime, Jack McGrath starts at loosehead against Wales this Saturday in Cardiff with Dave Kilcoyne on the bench. Michael Bent is covering tighthead so that appears to rule out Connacht’s Denis Buckley and James Cronin, who vies with Kilcoyne for the Munster number one jersey.