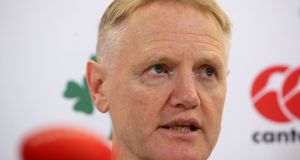 Necessity being the mother of invention, both Ireland and South Africa are likely to unveil much changed line-ups when Joe Schmidt and Allister Coetzee announce today their respective hands for Saturday’s first Test in Cape Town.

Schmidt will go first, at 2pm local time (1pm in Ireland), with the Boks having pushed their announcement back until 2.45pm local time to avoid a direct clash. All the indications are that the first name to be announced will be Jared Payne.

Heretofore, Payne has won all of his 14 caps at outside centre, where his organisational skills, communication and role as the team’s defensive linchpin are all highly valued by Schmidt.

But with the injured Rob Kearney and Simon Zebo ruled out of this tour, and the uncapped Tiernan O’Halloran the only other specialist full-back in the squad, it makes more sense to keep Payne at full-back, where he has been playing all his rugby for Ulster since the Six Nations, rather than Robbie Henshaw.

Henshaw has also been playing at outside centre in Connacht’s successful Pro12 run-in, and so it makes sense to keep him in midfield, whether in his normal role at inside centre or at 13.

With Paddy Jackson seemingly set to fill the sizeable void left by Johnny Sexton’s enforced absence, there would then be an argument for playing one of the Ulster centres alongside him, and Luke Marshall has been a more regular midfield sidekick than Stuart Olding this season.

Up front, the frontrow may be the one unchanged combination from the last outing against Scotland in March.

Given that Donnacha Ryan’s concussion issues have limited him to just an hour’s rugby in eight weeks, it seems likely that the fit-again Iain Henderson or Connacht’s Ultan Dillane will partner Devin Toner in the secondrow.

Tommy O’Donnell’s non-selection, attributable in large part to his wedding clashing with the third Test, ensures another change at openside, where the versatility and experience of the 14-times capped Jordi Murphy is likely to see him picked ahead of the uncapped Sean Reidy. Then again, Rhys Ruddock filled that void at short notice when Ireland beat South Africa in their last meeting in November 2014, and CJ Stander could also be moved across there.

After the experienced core of their side retired following the World Cup – including their trio of centurions, Bryan Habana, Victor Matfield and Jean de Villiers, as well as Fourie du Preez, Schalk Burger and both Jannie and Bismarck du Plessis – the relative callowness of the Springboks’ team will revive echoes of Jake White’s first selection, also at home to Ireland, in 2004.

The hard-running and sniping Faf de Klerk is expected to be handed his debut at scrumhalf, with Elton Jantjies’s recovery from a broken finger assisted by a protective brace likely to keep him on the bench behind Pat Lambie at outhalf.

The in-form and lightening quick Lions’ outside centre Lionel Mapoe is expected to make his first start after a two-minute cameo against the All Blacks last year alongside Damian de Allende.

But the back three of JP Pietersen, Willie le Roux and Lwazi Mvovo are all survivors from the World Cup.

The same is also liable to be true of their entire starting pack, and conceivably including six of the forwards who started their 20-18 semi-final defeat to New Zealand at the World Cup.

The exceptions could be newly named captain Adriaan Strauss and, if picked, Siya Kolisi. Lock Pieter-Steph du Toit is expected to be named on the bench after returning to full training this week despite being ruled out for a month with a hamstring strain scarcely a week ago.