Jared Payne: Ireland must take chances against Wales this time 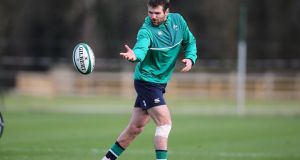 Nothing much fazes Jared Payne, his laconic drawl occasionally punctuated by a smile, as he discusses the disappointment of injury, a curtailed playing season to date and the differing demands of fulfilling the outside centre and fullback roles.

Ireland’s World Cup aspirations unspooled slightly when the in-form centre picked up a foot issue against Romania, compounding the damage in training the week of the game against France.

He explained: “(I) broke it in training. It was just unfortunate that something completely different happened in the space of a couple of weeks. When I first did it we were hoping for the best.

“As a player in a World Cup I didn’t want to face the truth that it was broken. I was probably forcing the physios to let me limp around for a few days and hope for the best but they finally told me to wise up.

“I went for an X-ray and it showed it was broken, the bone had moved a bit. I was in for an operation, the day before my birthday, October 12th; I woke up in the hospital so it was a cracking birthday.”

Payne returned to the match environment last month and it was striking to note just how easily he acclimatised for Ulster, both at fullback and centre. “I would rather have a few miles on the clock. I am not a big fan of training and rehabbing; I’d rather be playing. It’s a bit annoying but as you say take the positive and I guess I’m fresh, eager and keen to get out there.”

He was coy when asked about that position he’ll play in on Sunday. “They’re pushing me into 10 once or twice,” Payne smiled. “I have been training all over the shop the last few weeks. I’m happy wherever.

“As long as you get on the field, after the first two or three phases, you get to play pretty much what’s in front of you and that’s when you start to enjoy the game. I’m not too fussed where I get put. I’ll wait for Joe (Schmidt) to make that call and do my job on the weekend.”

He’d relish the chance to renew his midfield partnership with Robbie Henshaw and feels that there is a little bit of a score to settle after finishing second best to the Welsh midfield axis of Jamie Roberts and Jonathan Davies in last season’s Six Nations game.

“They’re big boys as you say, very accomplished footballers, have played a lot of rugby together and they have a great partnership there with (Dan) Biggar running the show.

“They probably came out on top the last time. As a group they dominated us so it is up to us this time to stand up to them and try and match them physically and bring a little extra in attack.

“We’ve looked at a few tweaks but we’ve also looked at the opportunities we felt we created. If we get the chance this year we’ve got to make sure we take them and don’t let them off the hook. We forced them to make a fair few tackles last year so hopefully we can do something similar and this time get a few more tries.

“I think we get given a different gameplan each week depending on where we see the opportunities against the opposition. I don’t think it’s a matter of changing things dramatically, it’s just executing better and if there’s space we break it and if not we use other options to get to the space that we see.

“We get a pretty free license. I think all this talk about changing is a bit of knee-jerk reaction. We’re happy with where we are. If we’re a bit more clinical and take our chances we’ll be in a better place.”

Payne also got a chance for an up-close appraisal of Garry Ringrose, who took part in the Ireland training on Wednesday. “He’s a great, great footballer. He’s very calm and collected on the ball.

“He’s quick, he’s got good hands and he makes good decisions so he’s only going to get better and better with a bit more exposure. Fingers crossed he can come through.”