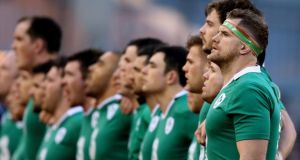 Ireland’s Jamie Heaslip stands for the National Anthem against France. He was substituted after 60 minutes with a back injury. Photograph: James Crombie/ Inpho

Jamie Heaslip will miss Ireland’s next Six Nations Championship match against England at the Aviva Stadium on Sunday week after scans revealed that he had suffered “fractures of the transverse process of three vertebrae in his back.”

He appeared to sustain the injury after being kneed in the back by French secondrow Pascal Papé during last Saturday’s international, an action for which the Stade Francais player must attend a Six Nations disciplinary hearing later this week.

Italy’s Stefano Marrama, the match citing commissioner, adjudicated that the yellow card that Papé received from referee Wayne Barnes was not sufficient punishment.

A spokesperson for the IRFU said that they were optimistic that Heaslip would be available to play against Wales at the Millennium stadium on Saturday, March 14th. The initial prognosis, according to the official medical update, is that he will be ready to play in four weeks.

It’s a neat symmetry in terms of timescale as there are exactly 28 days between the French and Welsh matches from an Irish perspective. The IRFU statement read: “Although this injury causes a good deal of discomfort it does not impact on the structural integrity of the spine, and once healed should pose no long term issues.

“Typically this injury is treated akin to a soft tissue injury; according to symptoms. Jamie is already feeling more comfortable and it is hoped that he will be available to play again in approximately four weeks.”

Heaslip has been remarkably resilient fitness wise in his career, missing very few matches, but Ireland coach, Joe Schmidt, elected not to risk him for Ireland’s opening game of the Six Nations against Italy in Rome to allow him to recover from shoulder and knee concerns.

Given his consistent excellence for Ireland, his absence for the game against England is a blow and Schmidt must now consider the best way to replace Heaslip. Leinster’s Jordi Murphy fulfilled the role against Italy and replaced Heaslip following his injury at the weekend.

Seán O’Brien played virtually all of his underage rugby as a number eight and had occasionally filled that role for Leinster but has only started in that position once for Ireland in 33 caps and that was four years ago against Italy in Rome. He also played there when coming on for the Lions in the second Test against Australia.

If O’Brien moves then Tommy O’Donnell, a late call-up and impressive try scorer against Italy after the former sustained an injury in the warm-up, could resume as openside flanker.

Munster captain Peter O’Mahony has filled the green number eight jersey on three previous occasions; against New Zealand in Hamilton (2012) and during the two Tests against the USA and Canada on a summer tour in 2013.

Schmidt may be tempted to ask the Cork man to reprise that remit as this would allow him to play Iain Henderson as blindside flanker. The Ulster player has been hugely impressive since returning from hip surgery. England possess a very physically powerful backrow and the breakdown is going to be a key battleground come Sunday week.

The Ireland coach will look at his options during a two-day camp in Galway with Connacht providing the training opposition on Wednesday. Schmidt is unlikely to release any of the team that started against France to play for the provinces in the Guinness Pro12 but may be tempted to release some of the bench if game time is a requirement.

While Heaslip is forced to the sidelines, Papé looks like heading for a playing sabbatical of his own. Barnes consulted with the television match official at the time of the incident and watched replays of the incident on the big screen. The English referee adjudged Papé’s action to be intentional, using the word “deliberate” when brandishing the card. How it wasn’t a straight red, given the referee’s summation, remains a mystery.

France coach Philippe Andre claimed that Papé’s act was not intentional but the citing commissioner did not agree and he will appear before a Six Nations disciplinary committee hearing later this week.

Saints Andre had claimed: “When you watch the images of the incident I don’t think you can say it was deliberate.”

Munster prop James Cronin had a minor knee procedure last week following an injury sustained in the Italian game. He is recovering well and will be rehabilitated in Munster.

Scotland outhalf Finn Russell was also cited arising from an incident involving his Welsh counterpart Dan Biggar. Although Russell turned his back and pulled out of a challenge he caused the airborne Biggar to land on his shoulder/neck. Referee Glen Jackson sent the Scot to the sin bin.

Meanwhile, Manon André, the France women’s secondrow was also cited following the match against Ireland women in Ashbourne on Friday evening under Law 10.4(m), which states: “A player must not do anything that is against the spirit of good sportsmanship in the playing enclosure. (Alleged contact with Eye(s) or the Eye Area.)”