Ireland Under 20 team remain unchanged for visit of England 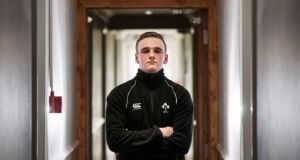 Ireland Under 20s have named an unchanged team from that which excelled against France two weeks ago for the challenge of England, where another bruising encounter awaits.

Head coach Nigel Carolan says he was happy with that second round RBS Six Nations 37-20 victory but they will need to match the huge physical challenge England will present if they wish to reproduce a similar performance and subsequent result.

While the starting fifteen remains the same there is one alteration on the replacements bench where Fergal Cleary makes way for Harrison Brewer, who was part of last year’s Ireland Under-20 squad and started for Terenure College in the Ulster Bank League last weekend.

“We are in a good place mid-tournament with two wins from two. While the display against France was very pleasing, the English side will bring a huge amount of physicality with them, so we know the challenge we face,” said Carolan.

“If we can match them in the physical department, we hope to reproduce a similar performance like we did two weeks ago. The squad have worked very hard in training and are relishing the opportunity to play on a fast pitch at Donnybrook in front of a vocal home crowd.”