Ireland U-20 suffer second half blackwash at Eden Park 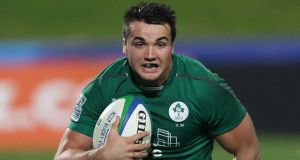 New Zealand U-20 45 Ireland U-20 23: It was half a match too far for a battered and beleaguered Ireland team that once again demonstrated cameos of rich quality but succumbed to the physical wear and tear of a long tournament. This was Ireland’s highest ever finish and given the obstacles they overcame they deserve nothing but praise for their efforts. This though was a brutal lesson.

New Zealand scored seven tries to two, a stark statistic that suggests a contest of a certain ilk in this Under-20 World Championship third and fourth place play-off game but it would be a misnomer. Ireland led 23-21 at the interval and if they somehow could have found a panacea to brittle defence, they might have gone mighty close against their hosts.

Ireland lost this game because of technically poor defence. The defensive line resembled an S-bend more often than not and instead of going low and putting the New Zealand ball carrier, Ireland went too high against physically more powerful opponents. The price was exorbitant.

It should be noted that the Baby Blacks’ running lines and offloading were of a very high standard. They had the game’s best player in outhalf Richard Mo’unga, the catalyst for their best moments, ably supported by fullback Damian McKenzie and a superstar in the making, left wing Tevita Li.

Ireland too were bolstered by some exceptional performances, notably fullback Cian Kelleher, who had a marvellous game, so too Frankie Taggart while Ireland’s centre pairing of Harrison Brewer and Garry Ringrose had moments of quality too.

Individually and collectively, the pack excelled in the set-piece and also in carrying ball into contact. They ran to a standstill, until there was nothing but lactic acid left in the muscles.

Ireland’s performance in those opening 40 minutes broached both ends of the spectrum, porously brittle in defence contrasting with some exquisite attacking patterns, the product of excellent footwork and intelligent support lines.

The defence though was a massive issue and while New Zealand’s ability to shift the ball in the tackle and run clever inside trail lines, Ireland’s first up defence was weak and directly responsible for all three tries during that period.

New Zealand outhalf Richard Mo’unga - he carried the ball in two hands and offered a constant running threat - made the initial incision, running 15 metres before offloading to the supporting Tevita Li to sprint under the Irish posts.

The second was equally disappointing from an Irish perspective. Ireland were pedestrian, right wing Ciaran Gaffney an exception, in chasing a Ross Byrne up and under. New Zealand fullback Damien McKenzie did brilliantly to catch and offload, despite being hit in the air by Gaffney. Li breezed past a couple of tacklers and this time it was the left wing that passed to Mo’unga for the try.

Yet for all Ireland’s shortcomings in defence, their work with the ball was of a very high standard, from their excellent rolling maul to a powerful scrum and the facility of several individuals to beat the first tackle; Kelleher shone like a beacon in this respect.

Ireland were correctly awarded a penalty try by French referee Alexandre Ruiz after the shunted the New Zealand eight back over their line from a scrum, while the second came from a Ringrose break, and the neat footballing skills and dexterity of outstanding tighthead prop Oisin Heffernan.

Outhalf Ross Byrne kicked three penalties and two conversions; Ireland led 23-21 at the interval and on the balance of play in that first half it was no more than the visitors deserved. It’s been a gruelling tournament from a physical perspective and there would have been a concern about whether the Irish side could last the pace.

They couldn’t, despite the collective bravery and character displayed, supplemented by the periodic arrival of fresh legs. Ireland’s defence remained a fundamental issue and New Zealand exploited it with a further four tries from James Tucker, Lachlan Boshier, Drummond and the game’s outstanding performer Mo’unga.

The harsh glare of the scoreboard was tough on the Irish boys, the discrepancy in points’ terms a product of tired minds and limbs. Ireland went down to New Zealand minus half a dozen front-line players and lost their captain and pivotal performer Jack O’Donoghue to concussion. They should be proud of what they achieved but it make take a day or two for that to sink in.

There was a consolation for South African captain Handre Pollard, after he was voted IRB Junior Player of the Year.