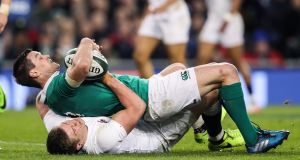 Jonathan Sexton and Owen Farrell in action during the Six Nations match at the Aviva Stadium. Photograph: Billy Stickland/Inpho

Dropped his first two high-balls under no pressure to a ripple of disbelief but thereafter ran some good lines taking out multiple defenders.

Might have had a try but lost the ball in contact and missed Elliot Daly on a kick chase. He was unlucky that Daly just got a hand on him to knock him off balance from his break at he would have been left one-on-one with Mike Brown. The groin issue saw him replaced at half-time.

He straightens so intelligently and gets over the gainline when the odds appear against him. He put Keith Earls away with a beautifully timed pass and his defensive reads were excellent.

Burst through Owen Farrell, great clear-outs, brilliant carrying and hard-hitting in the tackle, none more so than the crunching hit on Ben Te’o; a central, unyielding figure in shutting down England’s attack.

Won a couple of re-starts, had one grubber kick charged down, was bizarrely penalised for collapsing a maul in a game in which nothing really came or went his way.

Courageous to the point of incredulity for his complete disregard for his safety; he stood and took everything had to offer, late or otherwise and gave his team a focal point in attack and defence.

Being pernickety a number of box-kicks drifted a little far but he ensured that Ireland played with tempo given his speed to the rucks. Given the context of the game this was a super effort.

Ireland needed individuals to set the tone early on and he did exactly that with thumping tackles on Courtney Lawes and Billy Vunipola and some muscular carrying; one penalty aside it was a brilliant 60 minutes.

Returned from a HIA and resumed his massive work-rate on both sides of the ball, led his team, and tried to protect their safety by maintaining a constant dialogue with the referee. All over the English ball to slow it down at the breakdown.

Phenomenal durability in a game of massive collisions, many of which he was at the epicentre of and came out the right side. He fought for every millimetre of turf and worked like a Trojan in defence. There were times when he took stationary ball and got his team a few millimetres of turf.

Omnipresent wherever the centre of action was and his lineout calling was a big factor in a really hard-working, productive performance that included a significant tackle count.

He’s just such a smart footballer, spotting opportunities as he did for the try and that complements every else both with and without the ball. Nicked an English lineout too and tackled everything that moved in a white shirt.

If there was a lightning rod for Ireland’s performance then it was the Munster man who took the game to England physically and refused to budge an inch. Immense performance. A huge presence at the breakdown, grabbing turnovers, carried superbly too and a crucial lineout turnover or two.

A couple of handling errors will grate with him but he did manage to find his way into wider channels where he could make some metres. Missed a tackle or two and conceded a penalty but the nature of the game meant he had to take some risks.

When Ireland needed to be direct, he stepped up and carried through contact at vital times when his side for looking for continuity. Switching to eight at short notice didn’t see him bat an eyelid.

An overwhelmingly positive impact from the replacements, the odd penalty concession aside, with debutant Andrew Conway settling in superbly, so too Luke McGrath and Niall Scannell who came in to see out the important end game in pivotal positions.

Joe Schmidt came up with a gameplan into which his players bought completely and along with the rest of his coaching team deserve credit for finding a route map to victory. The devil is in the detail and no one does it better: a satisfying coup.