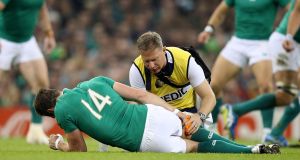 Ireland and Ulster winger Tommy Bowe is facing six months on the sidelines after he underwent surgery to repair the knee injury he sustained during Ireland’s Rugby World Cup quarter-final defeat to Argentina.

Bowe was stretchered off during the first half of Ireland’s 43-20 loss in Cardiff, and it was revealed he had suffered posterior cruciate ligament and meniscal injuries to his right knee.

And now his province have confirmed the 31-year-old will now miss next year’s Six Nations campaign after going under the knife on Monday.

Meanwhile Iain Henderson will be out of action for six weeks with the dynamic forward set to undergo surgery on Tuesday to stabilise a joint in his hand which he also damaged in theArgentina defeat.

Henderson’s injury will serve as a blow to Ulster boss Neil Doak ahead of their Champions Cup fixtures against Oyonnax on November 14th and Saracens on November 20th.

Doak is already withouth Jared Payne, with the province yet to give a return date for the Ireland centre after he underwent surgery on a fractured foot.