After a positive result in final warm-up match, John O'Sullivan breaks down what we learned 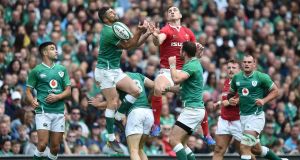 The occasion demanded a positive result, the last match at the Aviva stadium for Ireland captain Rory Best and head coach Joe Schmidt and the home side delivered a morale boosting, muscular 19-10 victory over Wales.

Ireland sought momentum to take to Japan and the World Cup and have largely accomplished that goal. Twickenham offered a painful reminder that a substandard performance can have harsh consequences but they have salvaged plenty from that wreckage in the past two weeks.

Part of that regeneration has been the return to form of a number of players and it augurs well going forward. Once again there were some significant contributions. Rob Kearney was outstanding at fullback, sharp, authoritative and focused, Bundee Aki backed up last week’s excellence with another towering 80 minutes, while Robbie Henshaw’s first appearance of the season was hugely impressive.

Up front James Ryan led the way, immense again, Tadhg Furlong was more like his old self, so too CJ Stander, while a word for Jean Kleyn, who, a couple of penalties aside, led Ireland’s tackle count in the first half and provided a powerful physical presence.

It was arguably the most impressive aspect of Ireland’s performance, especially in the first half when Wales edged the possession and territory stakes. The home side forced four turnovers in the tackle and one forward pass, the line speed aggressive and coordinated, the communication and shape conspicuously excellent.

Kleyn led the way by racking up 10 tackles in the first 40 minutes as Wales rarely threatened to crack Ireland’s resistance. The visitors tried to mix up their game but Ireland read their attentions and shut them down effectively. In the second half the home side choked the Welsh, corralled them effectively and hung onto the ball through multiple phases.

The Springboks have shown that defence can be an effective transition into attack and by extension points. A minor cavil is that Ireland might do a little more with turnover ball.

When Rory Best’s first two throws were picked off, the tension was palpable but the Irish captain demonstrated his character by refusing to buckle, on several occasions electing to kick penalties to the corner and backing himself to deliver under significant pressure.

Ireland’s slow walk and jog-in tactics to the first two lineouts didn’t help, referee Mathieu Raynal warned them against that gambit, and their set-up as a result a little bit laboured and predictable. Once this was addressed, the home side won all their remaining throws, earning two free-kicks when Wales were penalised for closing the gap. James Ryan took responsibility, calling ball on himself as he moved up and down the line.

A word too for replacement hooker Sean Cronin. Three of his throws were to the tail of the lineout, all delivered accurately and it gave his team the perfect platform to choose the point of attack. Stander showed that he is a viable option out of touch, both at the front and back.

It was interesting that Ireland didn’t really contest any of Wales’ eight lineouts, preferring to stay down, drive and defend the maul.

There was one gorgeous set play early on and the home side did escape their 22 at one point with some neat interplay between Robbie Henshaw and Bundee Aki, but Ireland got too flat at times and under-resourced in terms of bodies to clean out rucks after going through multiple phases.

There were other line-breaks, notably Josh van Der Flier, Aki and Jordan Larmour while the patience and accuracy for Kearney’s try was laudable. In the second half Ireland squeezed the game, retaining possession and dominating territory. They forced Wales to concede penalties and given access to the Welsh 22, they punished the visitors with two muscular finishes.

In referencing last week’s comments about Willy Wonka golden tickets, where Ireland failed to convert opportunities from five metres out, this time they converted a brace, leading to tries from Furlong and Ryan. There is still scope to refine the shape a little and perhaps reach the end product a little more easily.

There are a few areas of the game that need polishing. Conor Murray launched five box-kicks, none of which were really contestable, drifting just a few metres too far while Johnny Sexton, who put in some neat grubber kicks initially, propelled one or two that drifted too long. Jack Carty kicked well when he came on as a second half replacement.

Ireland’s passing was a little out of kilter at times, players forcing teammates to check to take possession as they hit inside shoulders; it needs to be more sympathetic and accurate.

A coach’s ideal is that the replacements add value and Ireland’s bench certainly did that to a man, infusing the team with energy at a time when they need to sustain they dominance they had worked so hard to earn. It was in direct contrast to last week’s effort and again something that has been part of a gradual improvement throughout the World Cup warm-up matches. The incremental improvements are positive as thoughts turn to Japan.