Ireland game a trip into the unknown, says Shaun Edwards 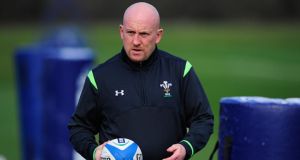 Shaun Edwards admits Wales’ opening World Cup warm-up game against Ireland has an element of journeying into the unknown.

After two months of training that included punishing camps in Switzerland and Qatar, Wales enter the competitive phase of their World Cup preparations at the Millennium Stadium on Saturday with four Test debutants and a new captain.

“It is very unusual, particularly for some players playing for those World Cup spots, for your first game of the season to be the biggest game of your season,” Wales defence coach Edwards said.

“We are all competitive people, and any game of rugby that you go into you desperately want to win, particularly in front of your own fans.

“No-one kind of remembers who wins friendlies in six to eight months’ time, but in the here and now it is very important for us because people are playing for spots and you want to get the momentum going into a Rugby World Cup.

Wales prided themselves on their fitness at the last World Cup four years ago, when a fourth-placed finish was their best on a global stage since 1987.

Edwards, though, knows it will be about the rugby this weekend as they build towards a tournament that sees them in the same pool as England and Australia, with just two quarter-final places available.

“We are pretty happy with where we are conditioning-wise,” he added. “We have put a lot of hard work in during those two camps.

“It’s the first game of the season, and sometimes you have to tape back some of the enthusiasm, whether you are a 100-Test veteran or coming in for your first cap.

“You are not going to be massively in the groove as if you were six to eight games into a competition. It is important not to overplay, although it is the first game of the season.”