Ireland end 111 years of hurt to beat the All Blacks

Ireland’s Robbie Henshaw scores their fifth and final try against the All Blacks. Photo: Inpho

Ireland players celebrate their 40-29 victory as the final whistle blows during the international match between Ireland and New Zealand at Soldier Field in Chicago. Photograph: Getty

As Rory Best declared in his on-field post-match interview at a rowdy Soldier Field in Chicago, it’s been a long time coming. Just the 111 years, that’s all. But at last, that black stain in Irish rugby has been removed, with a first ever victory over the All Blacks in 29 attempts.

Fully deserved it was too. Soldier Field crackled with atmosphere, vast swathes of the 63,300 bedecked in green watched Ireland dominate vast swathes of the first-half and kept counter-punching in a riotous rollercoaster of a second half, ultimately outscoring the back-to-back world champions and runaway winners of the Rugby Championship by five tries to four, and thus end their world record 18-match sequence of test wins.

It was a very complete performance, as it had to be.

As ever, the lines in the sand were drawn up front in the setpieces and at the breakdown. Fittingly, it started with the foot soldiers, the work-rate of the tight five - the tireless Jack McGrath, Rory Best, Tadhg Furlong, Donnacha Ryan and Devin Toner - was immense. The scrum was superb, and their line-out outperformed New Zealand’s. Best’s decision-making, in tandem with Johnny Sexton and the other team leaders, was superb.

Despite conceding four tries as the All Blacks threatened another of their damned comebacks, there was superb discipline in defence. CJ Stander and Jamie Heaslip had huge games, as did Josh van der Flier, who was Ireland’s leading tackler despite only being on the pitch from the 26th minute.

There was none bigger than Conor Murray, who bestrode the game peerlessly. Sexton was Sexton, and Robbie Henshaw overcame an early error to have a stupendously muscular game. Rob Kearney and Simon Zebo were magnificent in the air, and though living off slim rations, Andrew Trimble made his presence felt as he does.

After the Cubs had ended their 108 year drought on Wednesday, there was something in the Chicago air.

The pre-match pageantry was different too. After a minute’s applause in memory of Anthony Foley and then the New Zealand anthem, the New York-based Irish violinist Gregory Harrington performed a solo rendition of Ireland’s Call which made for one of the better versions overseas.

Cue a slow, extended version of the haka to which Ireland’s players lined up in the figure of eight as a further tribute to the 62-times capped former Irish number eight. 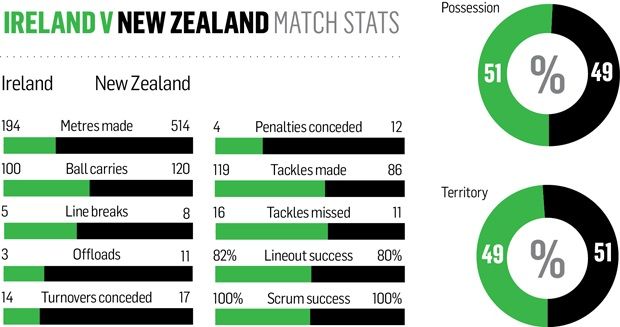 Congrats to cousin @KearneyRob on behalf of the Bidens. @IrishRugby's 1st win over New Zealand in 111 years. History made again in Chicago.

I take back (nearly) everything I said about 2016! Congratulations @IrishRugby! https://t.co/SlPEaNZTm4 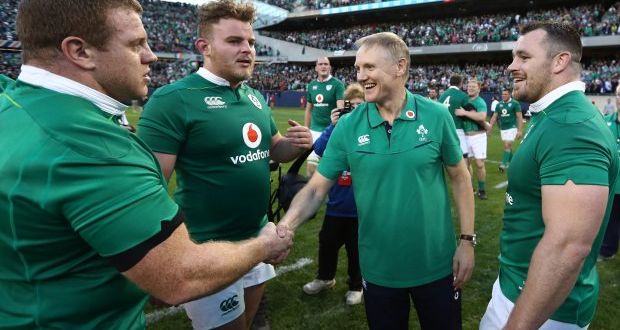 With over half the pitch shaded from the brilliant sunshine which graced Chicago all day long, Ireland were helped into the game by the All Blacks’ early indiscipline, which enabled the Irish line-out to provide a solid platform of possession.

Having kicked off, and launched Henshaw up the middle from the first line-out, Aaron Smith came in from the side and Sexton went up the line from about 45 metres out. When Joe Moody was penalised for not rolling away off the ensuing drive, Sexton accepted the easier kick to open the scoring.

Within a minute though, the All Blacks ruthlessly punished a defensive misread by Robbie Henshaw when he shot up and Waisake Naholo stepped inside him on halfway to break clear and then beat Rob Kearney. He was collared by Simon Zebo, but Stander couldn’t hold onto Naholo’s offload, the ball bouncing luckily off Kieran Read’s face over the try-line for George Moala to dive on the loose ball. Beauden Barrett, as is his wont, missed an eminently kickable conversion though.

But when Moody was then binned for a tip tackle on Henshaw, Ireland made hay. After a huge maul, which must have rumbled remorselessly for more than 20 metres, earned a penalty, Ireland went to the corner against the seven-man New Zealand pack.

They were rumbling diagonally toward the touchline by the corner flag when Best twisted to stay infield and Murphy joined the maul to take the ball and, helped by Jack McGrath claim the try. After lengthy recourse once more to the TMO, Mathieu Raynal awarded the try.

The All Blacks compounded an overthrow when Liam Squire was penalised for a high tackle (making the penalty count 5-1) and Sexton, from inside half-way, extracted every inch from his penalty up the line to find touch seven metres out.

Murphy extended himself to do just enough to claim Best’s slightly overcooked throw, and a couple of phases later across the pitch Kearney took a superb inside line off Sexton’s short pass and also beat Aaron Smith’s tackle before Read did just enough to bring him down. Even so, Stander calmly stood over the ball, picked it up and took Kaino’s low tackle to go even lower and burrow over.

Barrett trimmed the lead to 15-8 after Murphy’s fumble was compounded by Murray going offside, but Sexton restored it to 18-8 in punishing Dane Coles’ lazy run. “Back to a ten point lead for the Irish Rugby Football Union,” declared the US TV commentator.

Henshaw then executed a choke tackle on Kaino, helped by Stander and Best, earned a turnover and the first scrum of the match, which was rock solid. But after an extended stoppage, the unfortunate Murphy was stretchered off with what appeared a bad injury to his left knee.

Another Dane Coles overthrow contributed to Ireland having 72 per cent of the possession in the first half-hour, and in the 34th minute they struck again. Barrett failed to gather Sexton’s up-and-under, and Murray then grabbed Read’s tap back to win possession. A couple of phases later, he dummied at the base, Aaron Smith bought it, and he sauntered in from 20 metres out for Sexton to make it 25-8.

Ireland even finished the half the stronger, Kearney grateful to the cavalry to arrive in helping to heave Julian Savea over the touchline.

From Murray’s box kick, Stander poached for a fantastic turnover, and from Murray’s kick ahead, Tadhg Furlong was third man up to tackle Ben Smith. Typical of Ireland’s work-rate, Furlong and McGrath then executed a choke tackle on Kaino, for the Irish scrum to sign off the half and Sexton to kick the ball dead with a 25-8 interval lead. Shades of the 19-0 lead at the Aviva three seasons ago after 18 minutes, the memory of which ensured no Irish supporter in Soldier Field or those watching on TV were even thinking of counting a single chicken.

The second half began with New Zealand attempting to get their attacking game going, but Patrick Tuipulotu fumbled and after Henshaw made a big hit on Squire, Aaron Smith’s wayward pass eluded Barritt and Sexton made the follow up tackle on Ben Smith whereupon Read went off his feet. Smith was promptly replaced by TH Peremnara.

Moody was a little unlucky to be penalised for a high tackle on Rob Kearney, but even so Sexton’s long touchfinder again earned a line-out five metres out. The drive was eventually held up as Squire brought Best down, but sucked in enough defenders for Murray and Sexton to go back to the blindside for Zebo to score in the corner. Ireland led 30-8 entering the last half-hour.

After Sexton’s kick out on the full, the All Blacks finally awoke. Dane Coles, naturally, was the catalyst with his phenomenal ball-playing skills that could just as easily accommodate ‘12’ on his back as opposed to ‘2’; offloading out of Heaslip’s tackle for Perenara to gather one-handed and score.

Barrett converted and then, seemingly corralled by three tackles, manufactured an under-arm, one-handed offload for Ben Smith to score adroitly by the corner flag. Barrett even nailed the touchline conversion.

When Read was penalised for obstruction from the ensuing restart, and with Sexton cramping, Murray’s penalty made it 33-22. Even so Scott Barrett, brother of Beauden and making his debut off the bench, took Squire’s no-look pass to beat Toner, and then Kearney, for a try. His brother’s conversion made it 33-29.

It was at this point that Ireland held firm when many would have expected the All Blacks to complete another of their comebacks. Charlie Faumuina knocked on, and Andrew Trimble made a massive hit on Squire to force a turnover, the impact of which was huge on the game’s psychic energy.

The vast majority of the crowd were clad in green and stood as one in applauding their team as Murray fed the ensuing scrum. When Ireland attacked wide, Zebo put in a perfectly weighted kick behind, and Murray made the follow up tackle on Savea to force him into touch in goal with help from Trimble.

The win was effectively secured off the ensuing scrum when Jamie Heaslip ran diagonally infield off the base and slipped a reverse pass to Henshaw, who used his strength to take two tackles for a fine finish. Joey Carbery’s conversion made it 40-29, and Ireland could even afford a missed penalty by their debutant out-half.

Owen Doyle: Henshaw can count himself lucky his Lions dream is still a reality

All In The Game: Plymouth Argyle’s vaccine mix-up

2 Owen Doyle: Henshaw can count himself lucky his Lions dream is still a reality