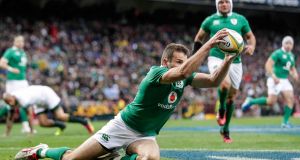 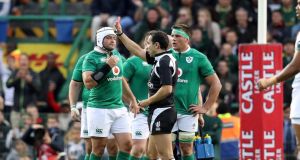 As a one-off win, perhaps Ireland’s biggest of all time, but assuredly of the professional era and in modern memory. Not only was this an historic first victory over the Springboks on South African soil but it was done despite playing the last 57 minutes with 14-men.

It appeared the game would hinge on a fateful 23rd-minute red card for CJ Stander, on his first Test on home soil for his adopted country. To compound the inglorious ignominy of it all, his sending-off was for pole-axing his one-time South African Under-20 team-mate Pat Lambie.

The Springboks outhalf chipped from deep inside his own half ahead of the advancing, fast-up green line – which had clearly injected more line speed in Andy Farrell’s first game as defensive coach.

Stander jumped and extended his arms upward in what seemed a clear if unsuccessful attempt to block the ball, but in doing so followed through on Lambie and caught him in the face with his leading right hip.

The head is sacrosanct and, as ever, the repeated slow motion replays only made it look worse, while also inciting the crowd. Thus, despite Rory Best signalling that Stander had his hands upright and was clearly attempting to block the ball initially, French referee Mathieu Raynal brandished Ireland’s flanker with a red card.

The Scottish TMO Jim Yuille and Raynal decreed that Stander had “made no attempt to charge the ball down”, despite the apparent evidence to the contrary, and deemed it “very dangerous play”. The decision seemed a little harsh, and by that stage already a couple of flying entries by the abrasive Springboks locks appeared to have far more intent to hurt.

Stander left the field to a cacophony of booing, his tour probably over and with an uncomfortable holiday to come here, while Lambie was applauded when stretchered off soon after. Ireland were 10-3 ahead at the time, having begun brightly with a try by Jared Payne, but had almost an hour to play with 14 men.

It brought to mind Jamie Heaslip’s 16th-minute red card against the All Blacks in the first of the two-Test tour in 2010, which along with a yellow card for Ronan O’Gara, contributed to that 66-28 defeat.

But not only did Ireland make light of their numerical disadvantage with their voracious work-rate and communication in defence, they kept seeking to play rugby – attacking with width, god strike moves and offloads – for large tracts of the remaining hour you’d hardly have noticed they were a man down.

They even went down to 13 men for 10 minutes soon after falling behind when Robbie Henshaw was sinbinned, but won the ensuing 10 minutes 3-0, and regained the lead through Conor Murray’s try and were steered home by the boot of Paddy Jackson, who kicked 16 points in a fine, mature display.

It would be almost churlish to single out any Irish player really, but outside Jackson, Luke Marshall was simply awesome, strong in the carry, huge in the tackle, who also used his footwork and kicking game to good effect. The foot soldiers put in some shift too, none more than the skipper Rory Best, Jack McGrath, Devin Toner, Jamie Heaslip and Jordi Murphy, while Murray’s influence grew and grew and grew.

WATCH: The best victory in Ireland's history? Their first EVER win on South African soil. What a performance | SS1 https://t.co/9uKaeH6zHH

Literally from the kick-off, JP Pietersen stumbled into an airborne Toner, and Ireland went wide right to find Andrew Trimble in space off the first lineout. But Ireland were pinged at the first put-in for a delayed feed.

After a big hit by Faf de Klerk on McGrath set the tone, and when Henshaw carried into contact, Francois Louw was quick over the ball in trademark style. Neither Iain Henderson nor Best could shift him, although Lambie missed the 40 metre penalty.

Then the penalties briefly flowed Ireland’s way as Heaslip poached, Eben Etzebeth came flying off his feet and Louw came in from the side.

A strong, well-controlled Irish maul with good low body positioning made early inroads to earn a fifth Irish penalty in the opening 10 minutes. From another patient maul and with an advantage for it being pulled down, Ireland went blind to Stander then to Henderson, before Marshall stabbed a little grubber through the legs of Damian de Allende for Payne to dive adroitly on the ball for the try. Jackson converted and Lood de Jager was also binned for pulling the maul down.

Lambie and Jackson exchanged penalties before Stander’s red card changed the entire complexion of the game and mood in the ground, and worse followed as a raft of penalties went against Ireland. After Elton Jantjies, on for Lambie, tapped over a close-range penalty, Jackson’s restart went out on the full.

The Boks came downfield and despite good line speed and big hits, notably by Trimble and Jackson on the Boks’ midfielders, Jack McGrath was penalised for not releasing and Jantjies trimmed the Boks’ deficit to 10-6.

Then, with a scrum penalty advantage, Jackson and Marshall pushed up straight before the latter was checked by De Allende’s decoy runner and apparent obstruction, and as Henshaw shot up to take out Jantjies, the outhalf timed his inside pass back across his body expertly for Lwazi Mvovo to race through the ensuing hole and score untouched. Furthermore, Henshaw was binned for his high, fractionally late hit on Jantjies, who tagged over the conversion.

Remarkably, Ireland won the ensuing 10 minutes 3-0 as Jackson rewarded some good work by Heaslip, Toner, Henderson and co with a well-struck drop goal and after Murray made a try-saving tackle on Pietersen in one corner and the half ended with Jackson doing enough to force Louw’s foot onto the touchline before touching down in the other corner.

That was a badly needed tonic and, even more remarkably, after Henshaw returned, Ireland struck again. Payne slipped a lovely pass out the back to Trimble, who just about stayed infield and was his attempted pass infield was deflected to the floor by Mvovo. Best gathered on the run and from the recycle, Murray arced infield and slipped De Jager’s tackle to score his eighth Test try.

Jackson’s conversion made it 20-13 and Ireland had made a game of it. The Boks’ errors mounted, although both locks were hauled down just short of the line and Ireland were indebted to Best spoiling De Klerk at the base with his foot, having appeared to come around the side, before the skipper then ripped the ball from De Jager, who was promptly replaced.

Nearing the hour, with a break in play, despite the Boks losing at home to a 14-man Irish team, the 42,620 crowd decided to have a Mexican Wave. Even more surreally, with Trimble at flanker, and Tadhg Furlong on for Mike Ross and Trevor Nyakane for Tendai Mtawarira, Ireland won a scrum penalty just inside half-way. Alas, although Jackson’s penalty from almost 50 metres was well struck and had the legs, it came off an upright.

Even so, Ireland attacked off a scrum following another handling error in the malfunctioning Boks midfield, and when Henshaw grubbered through Willie le Roux not only failed to gather, but deflected the ball over the touchline.

Toner was done for sealing off, but promptly reclaimed a loose ball in the air and Frans Malherbe went off his feet, Jackson unerringly made it 23-13. Alas from the recycled restart, Jackson’s attempted skip one pass infield was picked off by Pieter-Steph du Toit for a soft seven-point intercept.

Even so, 14-man Ireland kept coming and although Jackson was just wide with a drop goal, there were some outstanding tackles in the outside channels, notably by McGrath and Heaslip on Le Roux, before Malherbe came in from the side and Jackson kicked the penalty to make it 26-20.

With the clock in the red zone, the Boks had one last desperate shot at salvation with a scrum near half-way, keeping their width and shape. Murray made one superb tackle to stop a thunderous charge by Warren Whitely, and with the very last play Le Roux passed to Pietersen on the left touchline for him to charge at the corner.

Payne held him up, helped by Henshaw, before Jackson joined in to help bundle the winger over touch-in-goal.

Ireland had done it, and fittingly had sealed it with a last defiant act. Ireland move on to Johannesburg with an unlikely shot at sealing the series next Saturday, but at the very least will take the series to the last Test in Port Elizabeth.