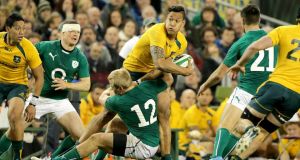 On one level it might look as if Ireland have missed a trick. Whereas England and Wales will each host four Tests in this last November window before the 2015 World Cup less than a year from now, and each will also pit themselves against New Zealand, South Africa and Australia, Ireland will instead play three matches, against the latter two and Georgia.

Conceivably, Wales and England may have bitten off more than they can chew and in part for financial reasons, bearing in mind England’s injury woes and with Wales liable to be missing a host of overseas-based players for their fourth game of November against South Africa. It falls outside the IRB ‘Test window’ and Premiership Rugby will only release players to England.

Against that, they are sure to test themselves to the limit and thus learn more about themselves over an intensive four-week period which, after all, is still less than the seven weeks required to go the duration of a World Cup.

Perhaps though, Ireland’s casualty toll is so excessive that it would also have proved damaging to the provinces.

One can also understand why Joe Schmidt has not set the bar inordinately high in targeting one win over either South Africa or Australia.

The Springboks arrive in Dublin this weekend on the back of a thrilling 27-25 win over New Zealand in Johannesburg four weeks ago which ended the latter’s 22-game unbeaten run, and a three-year losing run against their main foes.

They had begun their Rugby Championship campaign relatively sluggishly, with a laboured 13-6 win over Argentina in Pretoria and a fortunate 33-31 win away to the Pumas a week later in Salta, before then losing 24-23 to the Wallabies in Perth. But the 14-10 defeat in Wellington marked a turning point, as the Springboks had the All Blacks clinging on at the death.

Their coach Heyneke Meyer had targeted improved fitness levels as critical for a more adventurous game, and this was hammered home a fortnight later in Cape Town when the Springboks outlasted the Wallabies by 28-10, with 20 unanswered points in the last 12 minutes, including three tries.

Furthermore, the ball was in play for 44 minutes, which is about 10-12 minutes above the norm. A week later in the high veldt they came through at the end of another high-tempo game against the All Blacks at Ellis Park.

Many of the old virtues remain intact. Their lineout, with 37-year-old Victor Matfield back to run operations, had a 90 per cent-plus return in the Championship, and was fiercely competitive on the All Blacks throw in Ellis Park.

Their scrum was shoved around Salta by the Pumas but with Tendai Mtawarira and Matfield back in the tight five, it finished the campaign strongly. The intense close-in power plays and rumbles through their huge carriers also remain.

Then there’s their aggressive defence and ability to force turnovers in contact, both off the ground and on the ground.

They forced 19 turnovers against the All Blacks (almost unheard of) at Ellis Park, and over the Championship the three players who forced the most turnovers were all South Africans; hard-carrying number eight Duane Vermeulen, Marcell Coetzee and Bryan Habana. Much of their breakdown work has been attributed to Meyer hiring Richie Gray, a little-known coach and breakdown specialist from Galashiels.

The South African under-20 match-winner at 17 when they won the IRB World Championship on home soil in 2012 while still in school, and captain in his third under-20 World Championship in New Zealand this year, that Ellis Park game marked his sixth Test.

He’s still raw at Test level, and is prone to missing kicks, but he takes the ball to the line and has a lethal step off his right foot, and ran in two tries in his 19-point haul that day.

Since their last visit to Dublin two years ago, the Springboks have also unearthed the roaming Willie le Roux at fullback, a player who gives them real X factor and hence pops up as first receiver and all the way across the line.

Where before they would have played the percentages, now there’s a willingness to run turnover ball from inside their own 22, which led to scrum-half Francois Hougaard gleefully completing an 80-metre score.

Against the All Blacks, this was the biter being bit. Their new-found width saw them twice move the ball across the pitch from off-the-top lineouts around halfway, using blindside wingers and outside centre Jan Serfontein as decoys.

Although Meyer has called up five uncapped players in the 36-man squad for this tour, 29 were part of the Championship squad. For the first time, the Springboks have also been in camp together for a fortnight, with the SARU withdrawing all their contracted players from the Currie Cup.

They are missing some significant players, notably scrumhalf Fourie du Preez, and the back-rowers Francois Louw, Pierre Spies and Willem Alberts, who could join the tour at a later date.

With back-up tightheads Marcel van der Merwe and Frans Malherbe both sidelined, they are also a little thin in the front row, where there has been a huge reliance on Jannie du Plessis at tight-head.

“Don’t be fooled by the 36-man squad; the Irish aren’t going to see any of the fringe members,” one South African journalist says with a chuckle.

“The first two games of the tour are massive for them; Ireland the Six Nations champions and then England, the World Cup hosts for 2015, and the last chance to play them for the Boks. So they’re going to give it everything for the first two games and lay down a marker there.”

Georgia arrive eight days later, and more awkwardly for Schmidt, just six days before Australia. Nor will anyone with memories of Ireland’s taut 14-10 win over the Lelos in Bordeaux at the 2007 World Cup be inclined to take them too lightly.

The Emerging Ireland side did beat them 20-15 in the 2013 Tbilisi Cup, but last November they recorded the biggest win in their history, a 16-15 victory over Samoa at the Mikheil Meskhi Stadium. Earlier this year they won the European Nations Cup for the fourth year in a row with wins over Belgium (35-0), Portugal (34-9), Russia (36-10), Spain (24-17) and Romania (22-9), thereby ensuring their presence at next year’s World Cup and a first ever meeting with the All Blacks.

The team that started that last match featured their legendary backrower Mamuka Gorgodze, now with Toulon, and five other Top 14 forwards – including a front-row of Montpellier’s Mikhal Neriashvili, Toulouse hooker Jaba Bregvadze and Clermont tight-head Davit Zirakashvili, along with a couple based in the ProD2.

By contrast, their backs were the customary mixture of home-based or mostly French-based ProD2 or Federale1 players.

They will arrive match-hardened, with the core of their pack based in France, having qualified for their fourth World Cup in a row and having earmarked the game against Ireland as their season’s biggest.

That performance also demonstrated the Wallabies had been galvanised by the previous month’s soap opera which had seen Kurtley Beale fined $45,000 (almost €31,500) by the Australian RU after an independent tribunal found him guilty of a serious violation of the ARU code of conduct for sending an offensive photograph to former Wallabies staffer Di Patston in June, which led to Ewen McKenzie’s resignation as Wallabies coach and the appointment of former Leinster coach Michael Cheika.

The Wallabies have long since looked in need of a strong leader a la Cheika to establish a more professional culture, but they had been playing some wonderfully inventive rugby under McKenzie since he succeeded Robbie Deans after the 2013 Test series loss to the Lions.

After losing their opening tour match in Twickenham last year, their eighth defeat in 11 Tests, Australia beat Italy, Ireland (32-15), Scotland and Wales, and this season had a 3-0 series win over France before denying the All Blacks a record 18th Test win in a row ( with a 12-12 draw) They’ve since beaten South Africa and Argentina at home if then losing to both away.

However, they’ve talent aplenty, not least in the wondrous attacking ability of Israel Folau – who will be worth the Aviva admission money alone – Nick Phipps and Michael Foley.

Cheika – that trio’s coach at the Waratahs, whom he led to an historic Super 15 title this year – has left the squad largely intact, save for welcoming back Matt Toomua and Ben McCalman. Scott Fardy’s knee operation means he misses the tour, but Will Genia and Quade Cooper are back in the mix after long-term injuries.

As last year showed, they also tend to regroup well on end-of-year tours. You can see where Schmidt’s target is coming from alright.